Instead of honing negotiation skills in role-playing exercises, which customarily happens in such classes, he tasked his students to formulate and implement plans to raise $65,000 for Make-A-Wish Foundation of Utah.

"I created a very different course for this audience," Sondak said.

In a matter of three weeks, two classes of executive MBA students raised $160,000 in cash and in-kind contributions to be used to grant wishes of children with life-threatening medical conditions, which far exceeded Sondak's expectations. It also outstripped the previous fundraising totals of students at the University of Pennsylvania's Wharton School. Wharton professor Adam Grant developed the project, which Sondak adapted for the U.'s executive MBA students.

Sondak probably hadn't counted on how close to home the assignment would affect students, professors and administrators such as Taylor Randall, dean of the David Eccles School of Business.

Make-A-Wish Foundation had granted Randall's 3-year-old nephew Rex's wish of visiting Hawaii. Shortly after the trip, the boy died of complications of a brain tumor.

As one executive MBA student went about raising funds among his network of friends, family and business associates, he learned that Make- A-Wish had granted wishes for three children in his neighborhood. One of the children has since died.

Words can't explain the joy and strength that came from Make-A- Wish for our family. It was so neat to see my kids laugh and just forget (about Daniel's illness).

While most of the cash and in-kind contributions were donated by foundations, corporations, businesses and individuals, $10,000 came from the executive MBA students themselves, who range in age between 30 and 60. Many of them are parents, so the choice of Make-a-Wish as a charity resonated with them because of its focus on children, said Brad Vierig, associate dean of executive education.

On Friday, the students met 9-year-old Daniel Larsen, who has twice undergone surgeries to remove brain tumors. In 2008, Make-A-Wish Foundation of Utah granted his wish to travel to Disney World with his family.

The trip fulfilled Daniel's dream of meeting Mickey Mouse. "It gave me a break from having to go through all of that horrible stuff," he said.

His mother, Alisa, told the executive MBA students that the day the family received word that Daniel's wish would be granted was particularly trying. She had taken him to a children's museum in Ogden but he had become ill during the outing. The museum was full of children from a field trip. Daniel ended up vomiting in a trash can in public view.

"It was one of those really hard days," she said.

Then came a phone call that lifted their spirits in the moment and provided their family an experience that changed their outlook ever since. 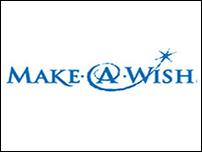 Boy with cancer granted wish: his own bedroom

Some want to fly in planes, others have asked to twirl with popular Disney princesses or meet up with various celebrities, but 5-year-old Alan Chavez just wants his own bedroom.

"Words can't explain the joy and strength that came from Make-A- Wish for our family," Alisa Larsen said. "It was so neat to see my kids laugh and just forget" the stress of her son's illness on their family and the toll the surgeries and treatments on Daniel.

Shar Lewis, chief executive officer of Make-A-Wish Foundation of Utah, told the students that their work would enable the organization to grant more than 20 wishes to children.

The cash and in-kind contributions raised by the students was a welcome gift for a nonprofit organization that has experienced a growing number of request for wishes.

"Your good deeds, your hard work will forever impact our children," Lewis said. "I hope you know for me, this is a pay-it-forward moment."

For executive MBA student Aaron Hall, the real-life application of classroom lessons was particularly rewarding. "It was much more collaborative. It was much more purposeful."

Another student, Chris Agnello, said asking people and businesses for contributions was an unaccustomed, and sometimes uncomfortable task.

But obtaining capital is a critical aspect of running a business. "When you start a business, you have to ask for money," he said.

The exercise resulted in 100 donors contributing to a nonprofit on track to grant some 200 wishes this year, Lewis said.

One of the new donors is Randall, along with his wife. Randall was already looking ahead to the possibilities of next year's efforts.

"The next class is trouble. That's a lot of money," he said.