SALT LAKE CITY — More than a dozen Utah dairy farmers have won an important strategic victory in their longstanding legal battle against the Intermountain Power Project.

The dairy operators contend "stray currents" from IPP's plant near Delta is making cows sick and sometimes killing the cattle. The Utah Court of Appeals ruled Friday that the farmers' key expert witness, excluded by the trial judge, will be allowed to testify after all.

The ruling is a major victory for a large group of family farmers who have been embroiled in a lawsuit against the massive power project for the past decade. They're now a big step closer to a jury trial.

The losses have been severe, according to Los Angeles attorney Suzelle Smith, who represents the dairy farmers. "The collective damages are over $250 million in terms of cow deaths and loss of milk production," she said.

The plant owners dispute the claim.

"If there is any damage, it's not coming from the plant," said Dale Zabriskie, a spokesman for the Intermountain Power Agency, which owns the Delta plant and is considering appealing Friday's ruling to the Utah Supreme Court.

A principal defendant is the Los Angeles Department of Water and Power, which purchases the vast majority of electricity from the plant for residents of Los Angeles. 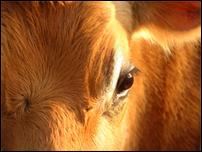 Utah farmers did a little better last year than in the previous few years, with the exception of dairy farmers. Many of them are still struggling, and some have even gone out of business.

The farmers and their cows came a long way before running into troubles in Utah. Many of them relocated from New England two decades ago, lured to the outskirts of Delta by promises of uncrowded land, good climate and good community.

Maria Nye said she and her husband packed up their kids and cows and moved from Connecticut in 1995. "I have to say that there have been a lot of tears, a lot of, perhaps, second-guessing," Nye said.

In their first years of operating the Mountain View Dairy near IPP, the Nye family noticed their cows were reluctant to drink and eat. Many became sick and died early. Milk production and revenues declined.

"We have done testing and there is electricity in the ground," Nye said. "Dairy producers know that electricity and cows are not a good mix."

"They're basically shocked when they drink water, and in their feed trough, and when they're out in the fields," Smith said. "It hurts their immune systems and it makes them eat less and drink less, all of which causes increased death rates and lower milk production."

IPA said their own studies show that when the plant is shut down, there is no change in underground electrical activity. "If there is any electricity in the ground, it is naturally occurring," Zabriskie said. "It does not come from the power plant."

Dr. Keeter was the expert who came in, looked at all the circumstances and said this is an epidemic. But the epidemic is the electricity that's being released from the Intermountain Power Plant.

Each side has experts waiting to testify. The latest twist involves the credibility of nationally-known veterinarian Andy Keeter. His testimony is crucial for the Utah dairy farmers, according to Smith.

"Dr. Keeter was the expert who came in, looked at all the circumstances and said, 'This is an epidemic. But the epidemic is the electricity' that's being released from the Intermountain Power plant," Smith said.

Zabriskie said other experts disagree with Keeter's approach. "The district judge ruled that the methodology used by this veterinarian was not accurate and should therefore not be allowed in the trial," Zabriskie said.

Friday's appellate court ruling reversed 4th District Judge Donald J. Eyre on that point. That means Keeter will be allowed to testify. For the family farmers who moved here so many years ago, there's now a stronger chance a jury will hear their claims of devastating financial loss.

"We are, I think, 17 of us in the lawsuit," Nye said, "and more than half of us are no longer in business. I think that's a fair bit of a problem."

The timing of a jury trial is uncertain. The location of a trial is up in the air as well. The dairy farmers have asked for a change of venue, arguing they may not get an impartial jury in Delta where hundreds of jobs revolve around the power plant.