SAN ANGELO, Texas — Texas prosecutors say they will present evidence that a polygamist sect leader convicted of child sex abuse had 78 wives in addition to his legal spouse.

They said at the sentencing phase of Warren Jeffs' trial that 24 of those were under 17.

Earlier, a jury convicted Jeffs of child sexual assault in a case stemming from two young followers he took as brides in what his church calls "spiritual marriages."

The head of the Fundamentalist LDS Church stood stone-faced as the verdict was read. Jeffs, who acted as his own attorney, stood mostly mute for his closing argument, staring at the floor, for all but a few seconds of the half hour he was allotted.

At one point he mumbled, "I am peace," and said no more. The only noise in the courtroom was the creaking of wooden benches brimming with spectators.

Jeffs, 55, had claimed his religious rights were being trampled on and that God would seek revenge if the trial continued. He now faces up to life in prison. The sentencing phase of the trial started right after the verdict, and Texas' attorney general said it could take three days.

Prosecutors played an audio recording Tuesday of a polygamist sect leader instructing his 14-year-old "spiritual wife" on how to please him sexually, and thus please God.

The FLDS, which has at least 10,000 members nationwide, is a radical offshoot of mainstream Mormonism and believes polygamy brings exaltation in heaven and Jeffs is God's spokesman on earth.

Police had raided the group's remote West Texas ranch in April 2008, finding women dressed in frontier-style dresses and hairdos from the 19th century as well as seeing underage girls who were clearly pregnant. The call to an abuse hotline that spurred the raid turned out to be a hoax, and more than 400 children who had been placed in protective custody were eventually returned to their families.

But authorities brought charges against several men from the group, with Jeffs by far the highest-profile defendant.

"There will be a tremendous amount of evidence, showing a lot more detail to the jury," he said. "The jurors, and Texans in general, are going to learn a lot more about the background of Warren Jeffs."

Abbott and prosecutors said the case had nothing to do with Jeffs' church or his beliefs.

Prosecutors relied heavily on information found during the raid on the compound and after a traffic stop in Nevada in 2006, when Jeffs was arrested. Much of the material was discovered in a vault at the end of a secret passageway in the temple and another vault in an annex building.

"You might have asked yourselves," Nichols said, "a lot of people may ask, why would someone record sex? ... This individual considers himself to be the prophet. Everything he did, hour after hour, he was required to keep a record of that."

On one of the tapes played at the trial, Jeffs made a reference to "drawing close" or "being close," which authorities testified is how church members refer to sex. Two female voices said "OK." 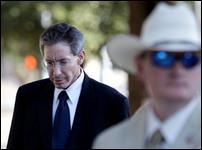 A coalition of Utah polygamous groups is denouncing the alleged acts of sexual assault that have surfaced during the Texas trial of sect leader Warren Jeffs.

"A good wife is trained for her husband and follows the spirit of peace," Jeffs was heard saying.

Another audio tape included Jeffs and the younger girl from a recording made in August 2006 at the Texas compound, according to testimony from Nick Hanna, a Texas Ranger involved in the 2008 raid.

Played in court, it was difficult to decipher, but Jeffs' and a female voice are heard. He says, "I perform this service in the name of Jesus Christ, Amen," then mentions the alleged victim by name. When she says something, he responds, "don't talk while praying." Several minutes of heavy breathing followed.

The jury wore headphones to better hear the recording and also followed a transcript. One female juror covered her face with her hand as she listened.

Jeffs represented himself after firing seven attorneys in the six months leading to the trial. He broke his courtroom silence with an objection marked by a nearly hourlong speech defending polygamy, and twice threatened the judge and the court with warnings of punishment from God.

He refused to cross-examine the state's witnesses, and delayed giving an opening statement until he began presenting his own defense. In that statement, he evoked images of the civil rights movement and mentioned former Mormon leader Joseph Smith Jr. He also asked the jury to remember constitutional guarantees of religious freedom.

One of Jeffs' many former defense attorneys, Deric Walpole, was asked if it was frustrating to watch him defend himself.

"It took me a while to get used to the idea, but it's about him, it's about what he wanted to do," Walpole said. "It's about that man doing what he sees fit."

Jeffs failed three times to remove state District Judge Barbara Walther from the case, the last rejection coming even without a hearing. He claimed Walther was biased because she issued the warrant for the original raid and was frequently updated as it progressed.

Eleven other FLDS men were charged with crimes including sexual assault and bigamy. All seven of those who have been prosecuted were convicted, receiving prison sentences of between six and 75 years.