REXBURG, Idaho -- Elder Dallin H. Oaks, an Apostle of The Church of Jesus Christ of Latter-day Saints, spoke Tuesday of religious discrimination members of his faith experienced following the passage of California's Proposition 8. He compared it to voter discrimination African Americans suffered in the 1960s.

Respect for religion in American life is deteriorating was what Elder Oaks told BYU-Idaho students. He said people of faith must insist on their constitutional rights to practice their religion and vote their consciences. 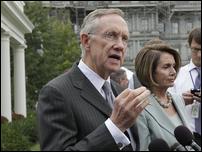 "While our church rarely speaks on public issues, it does so by exception on what the First Presidency defines as significant moral issues," Elder Oaks said.

One of those issues was California's Proposition 8 to end same-sex marriage. Latter-day Saints in that state joined a coalition of faiths to help it pass.

"When churches and their members, or any other groups, speak out on public issues, win or lose, they have the right to expect freedom from retaliation," Elder Oaks said. [CLICK HERE to read the full text of Elder Oaks' speech]

Three days after last November's election, thousands gathered for a rally and march in downtown Salt Lake City, protesting the vote on Prop 8. Earlier Tuesday, in an interview with Church Public Affairs, Elder Oaks said he was not talking about simple opposition.

"What I mean by intimidation is when people exercise their religious beliefs and they are then fired from jobs, churches are subject to vandalism, people are coerced," Elder Oaks said.

He likened that intimidation to what African Americans experienced during the civil rights movement.

"I would say that the intimidation I refer to in connection to Proposition 8 was not as serious as what happened in the South, but I think the analogy is a good one," Elder Oaks said.

He also said religious values and our country's political framework are interlinked, and that losing the influence of Christianity jeopardizes our basic freedoms.

"I maintain that this is a political fact, well-qualified for argument in the public square by religious people whose freedom to believe and act will always be protected by what is properly called ‘Our First Freedom,' the free exercise of religion," Oaks said.