Joshua Larson fishes in Utah Lake while his girlfriend, Katelyn Molen, plays with their dog, Theo, in Saratoga Springs on Aug. 22. Lake Restoration Solutions, which applied for a $6 billion plan to dredge the lake, is appealing Utah's decision to cancel the application. (Ben B. Braun, Deseret News)

PROVO — Lake Restoration Solutions is firing back after the Utah Division of Forestry, Fire and State Lands pulled the plug on a $6 billion-plus plan to create human-made islands at Utah Lake in late October.

The Utah-based development company confirms it is appealing the decision, arguing that the lake "still has massive environmental challenges that need to be addressed.

"Lake Restoration Solutions is committed to its mission of helping to restore and rejuvenate a struggling Utah Lake to once again be a gem for all Utahns to enjoy," company representatives wrote in a statement to KSL on Wednesday.

Lake Restoration Solutions was formed in 2017 as a "Utah-based social enterprise." It presented Utah with a plan that called for dredging Utah Lake, deepening it by 7 feet, on average, and using the material at the bottom of the lake to create human-made islands, some of which would be used for development, recreation and wildlife.

The Utah Legislature then passed a bill in the 2022 legislative session to direct the Utah Division of Forestry, Fire and State Lands to review options regarding the lake, which has suffered from low water levels and more algal blooms in recent years.

"I have been advised by our legal counsel that there are material and substantive legal issues with the proposal submitted by Lake Restoration Solutions, and that it is detrimental to the state of Utah and the public trust," she said at the time. "The proposal is unconstitutional and it is not legally sound."

"We are continuing our collaboration with the Division of Forestry, Fire, and State Lands to find the optimal solutions for Utah Lake that maximize the public benefits while still using private funding solutions to ensure there is not a tax increase for the restoration efforts," Lake Restoration Solutions officials said. "With the right restoration and enhancement efforts, Utah Lake would become an incredible recreation destination."

But the proposed plan has also run into criticism from environmental experts in Utah County, who question how dredging the lake and adding islands would fix the lake's issues.

"It didn't align with principles of ecological restoration," said Ben Abbott, an assistant professor of ecosystem ecology at BYU. "Since 2018, when I started here at BYU, I have worked to raise awareness about the project and ask questions of Lake Restoration Solutions leadership about details of what they were planning on doing, what data they were basing this off of and things like that."

Earlier this year, the company filed a lawsuit against Abbott, claiming defamation. He countersued, and the case is being sorted out in Utah's 3rd District Court.

Abbott, after reviewing the company's appeal, called the arguments in it "very shocking," in an interview with KSL NewsRadio on Wednesday. He believes the company is positioning itself to sue Utah over the canceled application, though he doesn't know how far a lawsuit will go.

"The state bent over backward to accommodate their project. They provided funding, they made agency time available to help this group develop their proposal," he said. "Then to see LRS just turn on them and attack them, and accuse them of doing all these bad things — being illegal and masquerading as a judge — (it's) really disappointing." 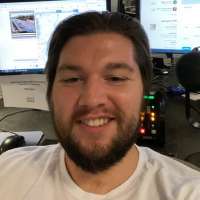 Adam Small
Adam Small is a reporter for KSL NewsRadio.