Have You Seen This? Tiger Woods 'tees off' on PGA competitor LIV Golf series

US golfer Tiger Woods speaks during a press conference at the British Open golf championship in St Andrews, Scotland, Tuesday, July 12. The Open Championship returns to the home of golf on July 14-17, to celebrate the 150th edition of the sport's oldest championship, which dates to 1860 and was first played at St. Andrews in 1873. (Peter Morrison, Associated Press) 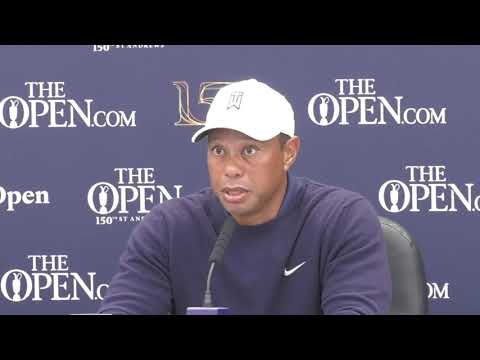 ON A SOAPBOX — As professional golf grapples with arguably the biggest competitor to the PGA Tour in decades, a LIV Golf series backed by the Saudi Arabian investment fund unafraid to lose billions of dollars, a lot of professional golfers, pundits and reporters have taken a strong stand for and against the series.

None carry as much weight as Tiger Woods, one of the greatest golfers of all time and arguably the greatest of his generation. And now we know exactly how he feels about it.

After arriving at St. Andrews ahead of this weekend's Open Championship, Woods was asked about the PGA Tour competitor LIV Golf series. And for several minutes, the former World No. 1 unleashed a scorching take calling into question the new league's validity, the ability of those who take the guaranteed payouts, and the dedication to the game required of those who opt for the 54-hole tournaments of LIV in lieu of the more-established, four-day PGA.

So far, the PGA Tour has issued bans for any golfer that plays in a LIV Golf event, which recently made its United States debut at Pumpkin Ridge near Portland, Oregon. It's also begun grappling with necessary changes on tour, including how players earn cards and a better partnership with the top golfers on the European tour, for starters.

Now, Woods is taking aim at those who go after the guaranteed cash that stems from the Saudi Arabian Public Investment Fund, which has already been accused of "sportwashing" the country's human rights abuses through the golf series backed by CEO Greg Norman.

And some of the players who opt for LIV Golf, which features names like Phil Mickelson, Brooks Koepka, Dustin Johnson, Sergio Garcia and a host of others,

"I disagree with it," Woods said. "I think that what they've done is they've turned their back on what has allowed them to get to this position."

Tiger Woods was asked about LIV Golf, and this was his response:pic.twitter.com/ShyVzrFhDx

But he went even farther. Some golfers — younger rising stars than Woods or Mickelson or their generation — may be giving up the game's top honors for a quick paycheck. They may never get the chance to contend for a major with these bans, fail to tee off on Amen Corner, or strut over Swilcan Bridge with a two-shot lead.

There's still a lot to figure out with LIV Golf, and world golf's governing body is only scratching the surface of the series. But Woods? He doesn't like it.

"I just don't see how that move is positive in the long term for a lot of these players, especially if the LIV organization doesn't get world-ranking points and the major championships change their criteria for entering the events."

Tiger's answer on LIV was so, so good. pic.twitter.com/qjKQoYpt9c

One homeowner in Louisiana was in for a surprise when they watched the footage of the supposed prankster on their doorbell camera and saw, instead of a group of bored kids, a lizard decided to stop in for a visit.
×