Gov. Spencer Cox on Outdoor Retailer show: Utah didn't miss it but 'desperately' wants it back

Event owner Emerald X is poised to announce where the shows will be hosted under a new contract that begins in 2023. Salt Lake City is vying with Denver and other potential sites for the gatherings that, before the COVID-19 pandemic, regularly drew tens of thousands.

And, earlier this week, dozens of outdoor companies, including industry heavyweights Patagonia, REI, North Face and others, promised to boycott Outdoor Retailer shows if they moved back to Utah.

On one hand, Cox said at his monthly KUED press conference Thursday that the $50 million or so in economic input that comes with each of the twice-yearly shows — hosted by Salt Lake City for 20 years before exiting in 2017 — was no longer needed in a booming Utah economy.

"We were told (the Outdoor Retailer shows leaving Utah) would be the end of the world, that our economy would crash, businesses would never move here, it would be awful for our state," Cox said.

"Turns out, none of that happened. We have the best economy in the nation. Our outdoor industry is thriving, it's stronger than it's ever been. Which is one of the reasons they're trying to move it back here."

Cox said the show owners and exhibitors got the worst end of the exit decision because they lost their "seat at the table" to engage in fruitful land use and policy discussions with the governor and state lawmakers while the end result for the state was "we did not miss them at all."

But some of the same outdoor industry people who were threatening to leave back in 2017 over GOP state leaders' support of reductions to federal land protections circled back with apologies after Emerald announced the shows were moving to Denver, Cox said. And, he'd still love to see the shows return to Utah.

"If Patagonia and these other companies really care about this issue, they'd want to be here to have this discussion, not go somewhere where everybody thinks exactly like them," Cox said. "We would love them to come back. We desperately want them to come back." 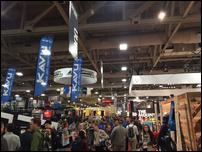 Patagonia, others threaten to boycott Outdoor Retailer show if it returns to Utah

An environmental conservation group and two dozen outdoor recreation companies say they would boycott the Outdoor Retailer trade show if it's moved from Denver back to Salt Lake City.

While bringing the shows back to Utah would, according to Cox, give the Outdoor Retailer participants a direct connection with elected officials to discuss policy issues, he underscored that the promised boycotts, should the shows return to Utah, will have no impact on his stance on federal land use and protection issues.

"That sort of boycott will do absolutely nothing to change any policy that's happening here in the state of Utah," Cox said. "Not even an inch. We won't give it another thought."

While dismissing the effectiveness of the boycott threats, Cox also said he was open to finding common ground with outdoor industry representatives and believes Salt Lake City easily beats out Denver when it comes to best places for the Outdoor Retailer events.

"Clearly, coming back to Salt Lake makes sense," Cox said. "Our airport is closer, our venues are less expensive, our outdoors are much closer. Come back and join the discussion. You can help make a difference. You can help to temper some of the things that are happening.

"We can find common ground. We may not agree about everything but I think there are some things that we definitely agree on."

On Tuesday, the Deseret News reported on a letter signed by over two dozen outdoor industry companies promising to boycott Outdoor Retailer shows if the biannual events return to Salt Lake City.

The letter was posted Monday by The Conservation Alliance, a group dedicated to land conservation efforts that counts over 270 companies among its membership. The website posting urges Emerald X to stay out of Utah over member objections to the long-running position taken by state leaders in opposing federal land protections.

"We've joined together in stating that we will not support or attend a trade show event in Utah so long as its elected officials continue attacks on national monuments and public lands protections," the letter reads. "Industry leaders are expressing their support for the Bears Ears Inter-Tribal Coalition and its longstanding efforts to protect the homeland of the tribes and pueblos with cultural ties to the Bears Ears landscape, as well as the overwhelming majority of the outdoor industry and the American public.

"Despite widespread industry objections, Emerald has demonstrated a continued interest in moving the Outdoor Retailer trade show to Utah, a state that leads the fight against designated national monuments and public lands."

Cox was called out specifically in the letter as the leader of Utah's effort "to strip these magnificent lands of federal protection while simultaneously attempting to woo Emerald to move the Outdoor Retailer trade show from Denver to Salt Lake City."

Utah's capital city lost its contract to Denver in 2017 as then-President Donald Trump's announced plans to reduce several areas of federally protected land riled the environmental community, outdoor enthusiasts and companies that specialize in outdoor products and services. At the center of the controversy was Trump's declared intention to reduce the 1.35 million-acre Bears Ears National Monument, created by President Barack Obama in a 2016 proclamation issued just before he left office.

Utah state legislators and then-Gov. Gary Herbert threw their weight behind the Trump plan by passing a resolution in the 2017 legislative session, declaring "strong opposition to the Bears Ears National Monument designation" and urging Trump to undo his predecessor's executive order.

Emerald X is expected to announce the new Outdoor Retailer host city soon, and Outdoor Retailer senior vice president and show director Marisa Nicholson said her company has been evaluating all issues and options ahead of striking a new contract.

"Outdoor Retailer and Emerald remain committed to supporting the outdoor and winter sports industries through hosting gatherings that both meet business needs and foster the spirit of our community," Nicholson said in a statement. "We have been in ongoing conversations with many across our industry and are taking all input and perspectives into consideration, including responses from recent surveys — we appreciate the passion and respect everyone's point of view.

"As we continue the process of evaluating all possible and realistic options, we remain thoughtful in our deliberations. Our goal is to host a vibrant event that not only reflects today's new normal, but also presents an engaging event that draws more people into this community in ways that are authentic and affordable. No decisions around future dates or location have been decided at this time, and we look forward to sharing our thoughts in the coming days."