Items for sale are pictured at Reams in Sandy on July 9, 2021. In a recent Deseret News/Hinckley Institute of Politics poll, an overwhelming majority of Utahns said they were concerned about rising prices amid the economic recovery from COVID-19. (Jeffrey D. Allred, Deseret News)

SALT LAKE CITY — U.S. consumer prices have been on the rise for 18 months but jumped some 7% in December, the fastest year-over-year rise since 1982, according to new federal data.

And, new national polling reflects that economic worries are supplanting COVID-19 as the top concern on the minds of Americans.

Released Wednesday, the U.S. Labor Department's Consumer Price Index report, a measure of average price changes on a selection of goods and services, found those prices surged in December at a rate not seen in nearly four decades. Increases in the costs of shelter, food and used vehicles helped drive the record increase as high consumer demand, coupled with ongoing issues related to supply chain networks, continue to impact family budgets.

Even backing out increases in the price volatile categories of food and energy left a 5.5% rate across all other areas, the biggest jump since 1991, according to the report.

Inflation has been much on the minds of Utahns for months and a July Deseret News/Hinckley Institute of Politics poll captured just how rampant those concerns were.

In that survey, 85% of Utahns said they were very or somewhat concerned about inflation. And among that group, 25% said higher prices would be "temporary" versus 60% who believe inflation will be a "lasting" issue.

The worries most Utahns shared with pollsters about ongoing inflation issues are turning out to be prescient, as prices continue to increase. While Utah's soaring economy has been a backstop for those fortunate enough to be riding that tide, individuals and families at the fringes of the state's high-powered fiscal performance are facing deepening challenges.

US consumer prices soared 7% in past year, most since 1982

Prices paid by U.S. consumer jumped 7% in December from a year earlier, the highest inflation rate since 1982 and the latest evidence that rising costs for food, gas, rent and other necessities are heightening the financial pressures on America's households.

Last month, Utah Gov. Spencer Cox shaded his celebration of Utah's nation-leading recovery from the worst economic impacts of COVID-19 with concerns about how rising prices were impacting the most vulnerable Utah residents.

"We're the envy of virtually every other governor when it comes to our economy," Utah Gov. Spencer Cox said in December at his monthly KUED news conference. "We have more deals being done in this state, more venture capital coming into the state than at any time in our state's history.

"New startups … there's never been a better time to work in the state of Utah. There are jobs available, jobs in every single industry, every single field."

But Cox qualified his bright take on where the state's economy has been with concerns about where it might be going. 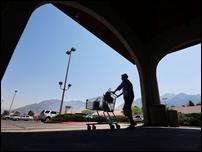 Mixed signals about U.S. inflation concerns continue to emanate from federal policymakers, but Utahns are decidedly united when it comes to how they're feeling about rising costs amid the ongoing economic recovery.

A new survey suggests that same concern is emerging as a priority for a majority of Americans.

A January poll from the Associated Press-NORC Center for Public Affairs Research found that management of the coronavirus pandemic is beginning to recede in the minds of Americans. COVID-19 is increasingly overshadowed by concerns about the economy and personal finances — particularly inflation — which are topics that could lift Republicans in the midterm election.

The poll found just 37% of Americans name the virus as one of their top five priorities for the government to work on in 2022, compared with 53% who said it was a leading priority at the same time a year ago. The economy outpaced the pandemic in the open-ended question, with 68% of respondents mentioning it in some way as a top 2022 concern. A similar percentage said the same last year, but mentions of inflation are much higher now — 14% this year, compared with less than 1% last year.

A significant portion of consumer inflation is still being fueled by pandemic-driven mismatches between demand and supply. Used car costs rose 3.5% from November to December and have soared more than 37% compared with a year ago. With new car production restrained by shortages of semiconductors, consumers have snapped up used cars, forcing up their costs.

Shortages at U.S. grocery stores have also grown more acute in recent weeks as new problems, like the omicron variant and severe weather, have compounded the supply chain struggles and labor shortages that have plagued retailers since the coronavirus pandemic erupted.

On Tuesday, Chairman Jerome Powell told Congress that the Federal Reserve is prepared to accelerate the interest rate hikes it plans to begin this year if it deems it necessary to curb high inflation. The Fed has estimated it will raise its benchmark short-term rate, now pegged near zero, three times this year. Many economists envision as many as four Fed rate hikes in 2022.