Utah Gov. Spencer Cox's first year in office is almost over. How are his approval ratings?

SALT LAKE CITY — Utah Gov. Spencer Cox's job approval ratings may have dipped slightly a month ago, but they're back up as he heads into the final month of his first year as governor.

That's according to a new Deseret News/Hinckley Institute of Politics poll, which shows Cox continues to ride a wave of high approval ratings that's remained fairly steady over the past 11 months.

Dan Jones & Associates conducted the poll of 812 registered Utah voters from Nov. 18-30. It has a margin of error of plus or minus 3.44 percentage points.

The poll conducted last month is the latest of a series of Deseret News/Hinckley Institute of Politics polls that have gauged Utahns' feelings about Cox throughout the year. Cox's approval ratings peaked at 66% in March, lingered at 65% in April, then dropped slightly to 58% in June. That latter poll was conducted June 18-25 by Scott Rasmussen of 1,000 registered Utah voters and had a margin of error of plus or minus 3.1 percentage points.

So far, October's poll has shown Cox's lowest approval rating at 55%, though that's still a clear majority of Utahns. Despite that slight dip, Cox's approval ratings have remained strong and steady throughout the year.

"Gov. Cox was elected with 63% of the vote and he has stayed essentially within the margin of error of that through his entire first year," said Jason Perry, director of the University of Utah's Hinckley Institute of Politics. "He's keeping a similar percentage of people supporting him now, like he did then."

Perry noted those numbers are similar to the approval ratings of Cox's former boss, former Gov. Gary Herbert. "It's just a steady number for a Republican governor from the state of Utah," Perry said.

That's despite a turbulent year for Utah and the rest of the country, which remains in the grips of the COVID-19 pandemic as it continues to affect all aspects of life and present an array of challenges for political leaders to navigate. 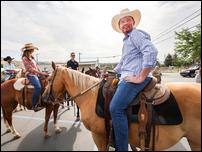 Do Utahns still like Gov. Spencer Cox? New poll numbers are in

A new poll shows the wave of high approval ratings Cox rode in the early months of his administration has receded — though a majority of Utahns still support him.

"If you look at the difficult issues facing the state of Utah, any elected official would be grateful to stay steady," Perry said.

Most recently, President Joe Biden's vaccine requirements for large employers has been a lightning rod for Republican pushback nationwide and in Utah.

Meanwhile, Utah remains among the nation's coronavirus hot spots as the dominant and highly contagious delta variant has fueled the state's case rates and continued to strain hospitals. Just last week, the new and heavily mutated omicron variant was detected in Utah. Health experts have urged Utahns to get the COVID-19 vaccine and be cautious given how little is known about the new variant.

Most Utahns, however, appear satisfied with Cox's job performance. And on the national level, Cox is among some of the top most popular governors across the U.S. Morning Consult ranked Cox as the 10th most popular governor in the country with 62% of voters who approve of his job performance. Out of that list, most of the highly approved of governors were Republicans, with only one Democrat (Connecticut Gov. Ned Lamont) ranking in the top 10.

Utahns have "grown accustomed," Perry said, to having governors "with very high approval ratings compared to their peers around the country."

Asked about this year's poll numbers in a Deseret News/KSL editorial board meeting on Monday, Cox answered modestly, saying "we'll take a pass on this year" given the chaos COVID-19 has presented to him and other governors across the U.S.

"It's a tumultuous time. Governors across the country are certainly feeling that. Everyone wants governors to solve all of their problems, until they try to solve one they disagree with, then you're a tyrant," Cox said, smiling.

But overall, Cox said he and his administration are "really excited about where we are, all things considered, what we've been through the past year. But we are so anxious to turn the page on this year."