Life after Afghanistan: The soccer player

SALT LAKE CITY — As a teen, Mohammad Tamim Solhadost was obsessed with soccer. His family couldn't afford lessons, so he turned to YouTube.

"It was just me and the wall," said the 23-year-old, reminiscing about hours upon hours he would spend at his childhood home in Kabul, Afghanistan, practicing his soccer skills and likely driving his parents insane.

Solhadost became good. Like, really good. So good that when he was 18, he was invited on Afghan National Television to showcase his tricks. The TV spot catapulted his career, and he would go on to play for several pro teams, including the Da Afghanistan Bank Football Club.

But his family's financial problems persisted — soccer is not a lucrative trade in Afghanistan — and Solhadost was eventually forced to quit and get a restaurant job, where he said he made the equivalent of $2 a day to support his family. He went to a government university in Kabul, studying English literature. He got a job with the Afghan Ministry of Defense's social media and communications team.

But his dream of playing soccer professionally never really died, and he spent nights after class training, hoping that interest from a team in Europe could be his ticket out of Afghanistan.

All the while, the Taliban swept toward Kabul. Solhadost said he was never worried. "Lots of people talk about how the Taliban will come, I am not believing because I believe in our Afghan army. It is not possible that the Taliban can come into the capital province."

On the morning of Aug. 15, Solhadost looked out his window onto what is normally a busy street. It was empty.

When he checked again a few hours later, he saw men with guns flying the dreaded white flag that Solhadost never imagined he would see in Kabul. He thought he was dreaming.

Solhadost knew he was in danger. His social media featured pictures of him standing alongside high-ranking U.S. officials and State Department employees, and he heard the Taliban had obtained lists of Afghans who had aided NATO forces. So the next day he went to the Kabul airport, armed with documents proving he worked with the Afghan Ministry of Defense, often alongside the communications staff of the U.S. Embassy. He wasn't ready for what he saw.

"Did you see the movie 'World War Z?'" he said, referring to the 2013 zombie movie starring Brad Pitt. "It was like that."

Thousands of people had crowded around a roadblock near the airport, guarded by the Taliban. He pushed closer but started to have second thoughts — what should he do if the Taliban asked for his paperwork? Would they recognize him from social media? Or would they find his name on one of their infamous lists?

He never got that far. Solhadost estimates he was 200 meters from the gate when the sound of machine gun fire ripped through the crowd and triggered a stampede. He retreated to safety. As the dust settled, he saw six, maybe seven bodies on the ground. He wasn't sure. Reuters reported five people were killed at the airport that day.

Solhadost ran home, bursting through the door to warn his mother and sister, who was eight months pregnant, not to go outside alone.

He logged onto Facebook and saw the videos from the airport, of people clinging to an American Boeing C-17 transport plane as it took off. Solhadost would later learn that his childhood friend Zaki Anwari, 19, had fallen to his death after holding onto the wheel of the plane as it took off. The two had played on the Afghan National Youth Soccer Team together.

Solhadost's brother, who served with the Marines as a translator but had moved to Salt Lake City, contacted the U.S. Embassy. They were granted visas for the family, each given a reference code to show the U.S. soldiers at the gate.

On Aug. 25, Solhadost, his mother and sister went back to the airport. The situation had deteriorated since his last visit, he said, with "7,000 people, maybe 8,000 people trying to get into one gate.

"And if you go into (the crowd) you can't breathe, people are pushing, maybe you fall down, maybe bomb blast happen. No one knows. But we tried."

By 3 a.m., a rumor spread through the crowd that the U.S. forces were to start letting two people through the gate at a time. Whether it was true is unclear.

"When people hear that, other people behind us are pushing to move near the door. And we fell down on the ground," he said. "Everyone walked on my body, I can't stand on my feet because lots of people's feet on me."

While he was on the ground, Solhadost could hear his mother's voice. He thought she was dying.

He got up, and he ran toward her screams, shoving people out of his way. Solhadost said he saw children trampled to death in the stampede. "When I saw the people, the children dying and killed, I feel very bad at that time. Because those are children. And when you saw children not breathing, what do you feel?"

He found his mother and helped her to her feet, met up with his sister on the edge of the crowd, and took off toward a different gate.

They didn't sleep that night. They drank water when they could, and ate cookies from home. They stopped at three other gates, looking for U.S. soldiers who could verify their reference code.

On Aug. 26 they stopped at a fourth gate. From about 300 meters away, Solhadost thought he could make out the uniform of a U.S. Marine letting people through. He told his family to stay on the outskirts of the crowd, then started pushing. He estimates he was 150 to 200 meters from the gate when a member of ISIS-K detonated a suicide bomb, killing 183 people including 13 U.S. service members. 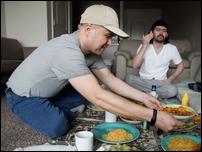 Azim Kakaie, the first Afghan refugee to arrive in Utah, said three days after landing that his first order of business was to meet the family of Marine Staff Sgt. Taylor Hoover, who was killed in a suicide bombing at the same gate his family was ushered through 30 minutes earlier.

The next several hours are a blur for Solhadost. It's not a memory he wants to relive. He doesn't remember seeing the blast — but he could feel it, and he could hear it. He can still hear it.

"I don't know what's happening. I just turned ... and I run. And I just see some blood. But I lose my mind and I run and I tried to find my mom."

Solhadost has tried to "document everything in (his) life."

As he talked about his time on Afghan television to the chaos at the airport, he pulled out his phone and scrolled through video after video, some of them graphic. He stopped on one from the airport gate where the bombing happened.

"Maybe 30, 20 minutes after this, bomb blasting happened," he said, pointing to hundreds of people crowding by the gate, some standing in a large, distinct trench. Graphic footage taken from the aftermath of the bombing shows the same trench.

After the ordeal at the gate, Solhadost and his family went back home, where he said they fell into a deep depression. His mother had all but given up, telling him they couldn't go back to the airport, that they would have to stay in Afghanistan. He told her they had to go.

He tried once more, but again found himself among thousands of people in front of a gate, this time guarded by Afghan National Army soldiers. They shot live rounds into the air and flash grenades into the crowd, one landing right in front of him. "I can't see anything, I can't hear anything," he said, describing the scene before pulling up another video.

Time was running out for Solhadost and his family.

On Aug. 30 he called his brother in Utah, telling him "we just have one day." His brother followed up with the Marines stationed at the airport — they were compiling a list of U.S. citizens and allies still stuck in Kabul, arranging buses to bring them close to the airport, then coordinating with the Taliban to let them through their roadblocks.

At 8 p.m., Solhahost and his family walked to an address provided by his brother and got on a bus.

They sat there for hours. At 3 a.m., Aug. 31 — the final day of the U.S. involvement in Afghanistan — the bus jolted forward, slowly chugging through the streets of Kabul until it reached a gate guarded by the Taliban.

Everyone aboard was ordered out of the bus and told to sit on the pavement. Then, one by one, they heard their names read from a list. "When they read my name, my family's name, it's unbelievable for me. And I run, I just want to run. It was like a dream."

Once through the gate, Solhadost and his family walked the empty street to the airport. A video on his phone shows a weary Solhadost, who pans the camera toward his family, before focusing back on himself, flashing a relieved grin. The bags under his eyes are dark. In another video, distant machine gun fire can be heard.

Once in the airport, he high-fived the first U.S. soldier he could find. "I tell him, 'I am so happy.'"

As his family began the biometric screening process, an alarm cut through the airport. Solhodast still isn't sure what happened. "I feel like maybe the Taliban is coming into the airport and attacking us," he said.

It's my big objective in USA, is to play for Real Salt Lake.

The Marines instructed Solhadost, his mother, pregnant sister and the other civilians in the building to lie on their stomachs and put their hands over their heads. Marines stood in front of every door, guns drawn, some yelling. After 15 minutes, the alarm fell silent and they resumed their screening. The Marine's hands were trembling as he walked up to Solhadost.

With the screening complete, Solhadost and his family walked out on the tarmac. "My heart is beating very fast," he said, describing a mix of excitement, disbelief and concern.

What if the Taliban started shooting at them, exposed on the runway? What if they shot at the plane? What if they couldn't take off? What if they were left behind in Afghanistan? A lifetime of trauma, heartbreak, violence and chaos were packed into the last two weeks. Leaving with his family intact seemed too good to be true.

"When our airplane is up really quickly, oh," he said, clutching his heart and laughing. "I feel so good and I sleep."

The plane landed in Qatar, where they stayed in a camp for one day before flying to Germany.

In Germany, his sister unexpectedly gave birth to a boy a month before her due date. They spent 11 days in the hospital with the baby on oxygen before boarding an emergency plane for Washington, D.C. Solhadost fell asleep somewhere over the Atlantic Ocean. He woke up as the plane was landing, looked out the window and saw an American flag.

The weeks following are best described as a flurry of red tape, paperwork, phone calls and moves. They flew to Camp Quantico in Virginia, then to Salt Lake City where they spent several days in a hotel, then moved into an apartment near the city's downtown. Catholic Community Services helped pay for a three-month lease.

Solhadost doesn't have work authorization yet, so he spends his days at the nearby park, practicing his soccer skills. He is determined to play professionally in America — not just any team, but Real Salt Lake.