SALT LAKE CITY — The shortage of police and law enforcement officers isn't unique to Utah but law enforcement agencies are getting creative in the state in their efforts to retain and attract quality individuals.

"Of course they're going to want to, because they're trained. They're trained to handle difficult situations, they know how to communicate well and make excellent officers but we still need quality officers in the jail," Rivera said.

In addition to modest raises, Rivera says they've spent the last few years getting creative in finding new recruits including pushing legislation that allows the sheriff's office to hire 19-year-olds at the jail.

"We currently are the only jail doing that but speaking with other sheriffs, they are going to be seeking that out as well," Rivera said adding that police departments can only hire candidates 21 years old and older.

However, Rivera said considering all the perks other police departments like Taylorsville and Salt Lake City are offering, the competition is tough.

"Salt Lake City just announced they are paying $2,500 to any officer that goes out and recruits someone else from outside their agency," Rivera said. "We can't compete with that." 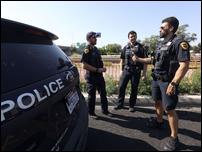 Salt Lake City gave police officers a pay raise 5 months ago. Is it keeping them on the job?

Other police departments like North Salt Lake and Tooele have also increased pay for officers.

Last week Rivera told the Salt Lake County Council she started 2021 with a full staff of deputy positions but now she has 71 openings on the corrections side and about a dozen on the public safety side. Rivera said she started noticing deputies leaving for neighboring agencies in July — what she terms "the wage wars."

"I just spoke at the academy yesterday, it was the first day. We only have 21 individuals in our academy, we average around 35 so that gives you an idea," Rivera told the council on Nov. 9.

Rivera said they have a hard time attracting new candidates because many people consider police work a greater liability than the benefit of serving one's community. She also cites low starting wages and the rising cost of living in the Salt Lake Valley.

However, Smith said those days are long gone. He too is struggling to retain and attract new deputies. "The last year didn't help," Smith said.

Smith said most of his deputies are leaving for higher-paying jobs in Salt Lake County.

"Especially some of the start-up agencies up there that have come up with the phenomenal numbers," Smith said.

"We are really good at doing more with less but there comes a point where it's a pretty critical piece of our communities. You can only go for so long," Smith said.

Rivera said they're also looking to recruit candidates from minority and refugee communities who perhaps haven't given thought to a law enforcement career.

"For right now, it's just, you're fighting to compete and keep those folks, and what we are doing is taking a look at where else can we pull from, where can we recruit from. We're looking at diversity, refugees and women who are historically underrepresented," Rivera said.

Rivera said she would also support a new bill at the legislature which seeks to allow officers to retire after 20 years of service instead of 25.