The idea is simple. For $69, guests can use Snowbird's new "express lane" to skip the line at six of the mountains most popular lifts, excluding the tram. Fast Tracks is available to all guests, although the resort will limit inventory. Prices may go up during holidays.

Think of Disney's FastPass, discontinued this summer, but replaced it with Genie+, a feature that still allows guests to skip lines for a fee.

"Using our knowledge of similar products and experiences, such as the use of our Mountain School lane, we know that the impact on regular lift lane wait times will be minimal. Only a limited amount of the Fast Tracks product will be sold daily, and it will be integrated into the existing flow of our lift lanes, one group from each lift lane moving forward at a time," said Dave Fields, Snowbird's general manager, in an email to the Deseret News.

The concept has not been received well in corners of the Salt Lake ski community. Some see it as yet another example of the ski industry only catering to its most wealthy clientele.

Anything Snowbird posts on its Instagram page as of late gets hounded by angry social media users calling the move a "money grab," "scam" and accusing the company of "limiting mountain access to the ultra wealthy." Some claim to be getting refunds on their seasons pass.

"We know that Snowbird skiers and riders are incredibly passionate about their sports and value their time on the mountain," Fields said of the criticism.

The focus of Wyden's letter is Mt. Bachelor, which operates under a U.S. Forest Service Special Use permit. Snowbird sits on a mix of private and Forest Service land.

"Snow sports are already expensive enough that equity issues have been persistent, and financially disadvantaged families have long been unfairly priced out of access — something a Fast Tracks policy is sure to only make worse," writes Wyden.

"My concerns with this policy, shared by many longtime Mt. Bachelor guests, are rooted in the understanding that a two-tiered system of access to public lands based on financial ability is antithetical to equity in the outdoors, leaving those who cannot afford to pay for the pass being literally sent to the back of the line."

A change.org petition asking "that Snowbird and all POWDR resorts immediately do away with their 'Fast Tracks Pass'" garnered almost 120 signatures in 24 hours.

"Snowbird should not be giving preferential access to the wealthy on public lands owned by every American," the petition reads.

Meanwhile a similar petition directed toward Mt. Bachelor has accrued over 10,000 signatures.

Fields said both Wyden's letter and the petitions will have no impact on whether POWDR moves forward with the system. 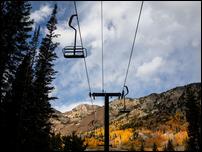 The dreaded red snake: Will Utah ski resorts see even worse traffic in 2021?

It's not exactly native to Utah, but it sure finds a home here often. It's most commonly seen in Big and Little Cottonwood Canyons during days of heavy snowfall and holidays, although in recent years it seems to rear its head every weekend.

The opposition, according to Harris Sondak, the David Eccles Professor of Business and Ethics at the University of Utah, is based in "the anger people feel when certain things get priced."

"The idea is, some trade-offs are taboo, and people have these ideas. And the pushback would not surprise me if it's coming from this notion of the taboo trade-off," he said.

Sondak is also mayor of the town of Alta.

Emotions are already high in Little Cottonwood Canyon, as the Utah Department of Transportation mulls two potential traffic solutions — an 8-mile, $592 million gondola or a $510 million widened road and enhanced bus service. Both proposals have come under public scrutiny.

Sondak, who stressed he doesn't believe Snowbird is "abusing people," says outdoor enthusiasts are already worried about access to public land in the canyon. The move from Snowbird, albeit small, comes in the midst of a charged debate over the future of Little Cottonwood and the ski industry in general.

"Ski areas used to be locally owned. And now they're owned by hedge funds and big corporations," he said. "It is surprising to me how much money there is to be spent on ski vacations, at least by some people. It's kind of remarkable."

Fields said Fast Tracks "can be added on for a single day, at a reasonable price, for any kind of guest-day ticket users, season passholders, etc. While we understand that not every guest may have the means to pay for an add-on to their ticket or pass, we believe that Fast Tracks is allowing some guests to access an experience that they otherwise would find inaccessible."

Alison Palmintere, Ski Utah's director of communications, likened the featured to any other enhancement resorts routinely implement, like snowmaking, lift upgrades or a new parking system. She said it's hard to tell whether it's something that will gain traction among the other Utah ski resorts.

"When resorts make enhancements that work, sometimes other resorts join in, and Ski Utah is excited to see how the season goes," she said.

POWDR did not respond to a request for comment.