SALT LAKE CITY — Utah was the fastest-growing state in the nation over the past decade, but its growth wasn't large enough to provide it an additional congressional seat, the U.S. Census Bureau announced Monday.

The bureau delivered the first of its long-awaited 2020 Census information to President Joe Biden, including the national population total and the state populations as of April 1, 2020. The data was used to create the apportionment of congressional seats and thus adjust the number of electoral votes per state for the next decade.

Within the data released Monday, the bureau found Utah's population as of April 1, 2020, rose to 3,271,616, an increase of 507,725 people from 2010. The agency uses percentage increase to determine the fastest-growing states.

Utah was the third-fastest growing state in the nation over the previous decade, trailing Nevada and Arizona. Its growth over the 2000s led to the creation of the state's fourth congressional district.

Utah's growth, however, wasn't enough to match growth in other states to gain congressional seats, not that it was much of a surprise. Some experts had previously estimated which states would either gain or lose seats based on recent population estimates.

Utah's growth rate has also actually leveled off since 1990, noted Mallory Bateman, state data center coordinator and senior research analyst at the University of Utah's Kem C. Gardner Policy Institute. It was 23.8% in the decade ending in 2010, and nearly 30% in the previous decade, Bateman said.

The moderation reflects several trends, including an aging population, more families waiting longer to have children, and many welcoming fewer kids than in the past, she said.

Other demographic changes are helping to limit those effects. A growing number of newcomers moving to the state from outside its borders has helped buoy its population, adding more than 177,000 newcomers and fueling 35% of growth in the last 10 years, Bateman said. That's up from 28% over the prior decade.

"We were a state that had pretty decent migration throughout the decade, so that helps kind of keep that growth trend up," Bateman said.

Still, she noted, natural increase — or births minus deaths — continues to drive most of the state's population growth.

Bateman and her colleagues with the Utah Population Committee conduct their own state population estimate as a check on the U.S. Census Bureau, considering state-level birth and death data, and the flow of people moving in and out. Their estimate was just 0.36% under the number out Monday.

Trends across the country

In terms of overall new population increase, Texas led the way with an addition of nearly 4 million residents over the past decade. Its new population is a little more than 29 million people.

Florida, California, Georgia and Washington rounded out the top five in that category. The top four all gained at least 1 million new residents. 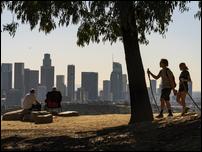 America's population growth has declined to its slowest rate since the Great Depression, the Census Bureau said Monday, while the nation's political center of gravity keeps shifting further to the Republican-led South and West.

The new distribution of congressional states will officially begin in January 2023 with the results of the 2022 midterm election. Census Bureau officials on Monday posted a blog that provided insight into how the apportionment process works.

The agency explained that the results are the breakdown of the 2020 resident population of the 50 states "plus the overseas military and federal civilian employees and their dependents living with them overseas who could be allocated to a home state" divided up among the total U.S. population.

The count also included U.S. territories like Puerto Rico. The island, which was devastated by Hurricane Maria in 2017, had the largest net loss and population percentage loss among any U.S. locations. The census data show it lost 439,915 residents over the past decade, which is an 11.8% decrease to about 3.29 million residents.

Monday's data is typically information that's released in the December of the year of a census but it was delayed by several months. Census Bureau officials said they needed more time to ensure the data was accurate after COVID-19 disrupted the Census process.

The complete information needed to complete redistricting still isn't expected until the end of September. That data will help the state create new voting maps, including the coverage of all four congressional districts.

The Utah Independent Redistricting Commission began meeting earlier this month ahead of the final data being released, while the Utah Legislature on April 16 revealed the 20 members who will serve on its redistricting committee.