As Skyler Miller of Cedar City looked out his backyard window on July 26, he saw something nobody could have imagined: a giant river of water breaking his cement wall and flooding his entire backyard. (Skyler Miller) 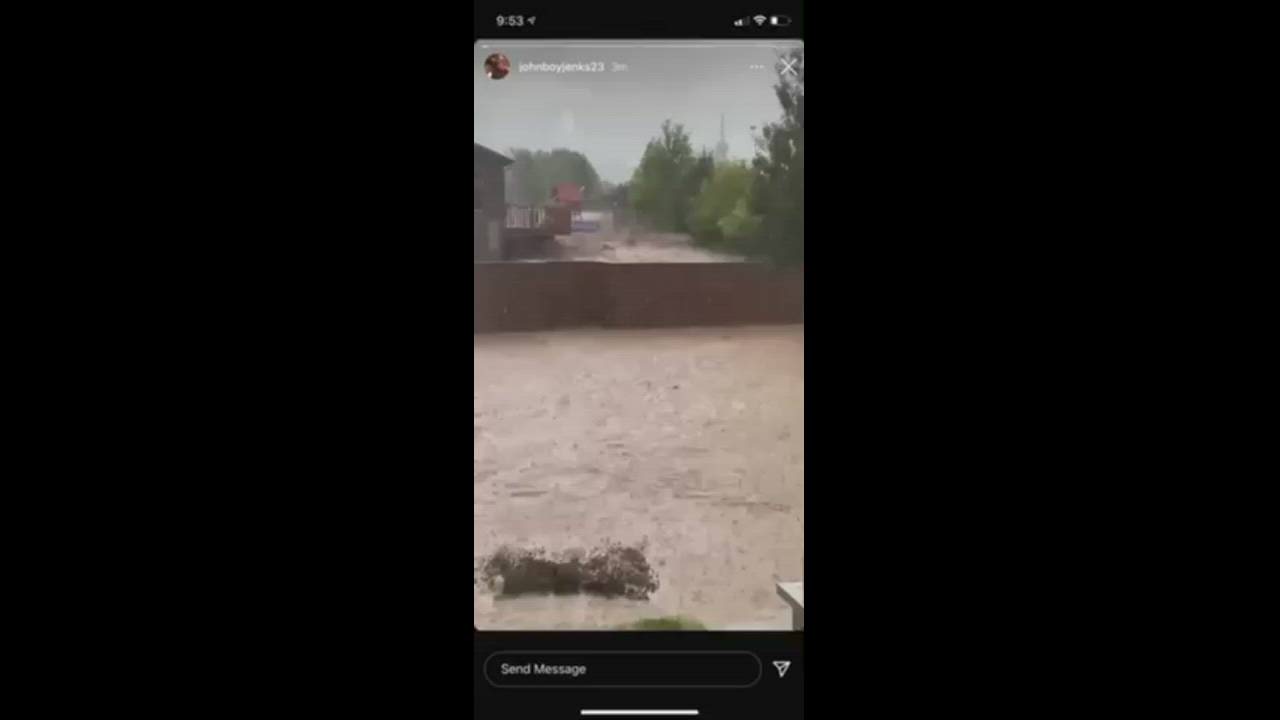 CEDAR CITY — Five words: "A river runs through it."

That's what Cedar City resident Skyler Miller texted his lifelong friend Mac Urie as he looked out his window to see gushing water tearing through his fence, engulfing his backyard, and running into his basement.

That river was a result of the flash flooding that overtook Cedar City on July 26. According to Miller, it all happened so fast.

"I was at home while my wife took the kids and some friends bowling when it started to rain," Miller said. "I actually went outside to enjoy watching the storm, because I love rainstorms. I figured that it would be a lot like most of the storms out here and be gone within a few minutes."

A few minutes came and went, as Miller watched the rain keep coming in stronger and stronger.

"This rain was different," Miller recalled. "It seemed to be coming from all directions, and it wasn't letting up. I actually went back inside to do some work hoping that it would let up, and when I went back to check on things I saw that our fence had been broken and water was coming in."

That fence was a cement wall that the family recently had built. Also new to the family's backyard was a cement basketball pad and trampoline hole for their three kids to enjoy. In an instant, Miller said he saw the yard and basement he and his wife had built for their family destroyed by floodwater.

As Miller watched this happening, the old adage "when it rains, it pours" took on both a literal and figurative meaning.

This rain was different. It seemed to be coming from all directions, and it wasn't letting up.

You see, Miller had been struggling with life. He said life, for him, had become a buildup of events that had caused him to revert inward and become bitter.

Miller is a teacher and has spent two decades coaching high school football — something he said he is passionate about. However, working in an environment that is often a lot of work with little return started getting to him.

"I grew up playing football, and looking up to coaches," Miller said. "I was offered a coaching position 20 years ago, and it has been my dream job because I get to give back to the community that has given me so much.

"But as many understand, it can get hard. When you lose it is hard, and when there are a lot of voices telling you what to do and how to do it, it sometimes sucks the joy out of it — and I started to get bitter. I began to look at people differently, and not in a positive way. It even changed me as a person. It hardened me, and I began to lose trust in people."

Miller described the past several years as being a time of reverting into a jaded mode where he just didn't like being around people.

As he watched the water pour into his backyard, Miller said he felt very alone but knew he had a friend he could call — a friend he knew since childhood: Mac.

"Mac and I text often random things, and we have just kept in contact all these years living in the same town," Miller said. "I sent him a text saying, 'A river runs through it,' along with a video I took of my backyard. Right away, he asked if I needed help."

Urie has equipment in his line of work that pumps out water and, according to Miller, he made it to his house with that equipment in a matter of minutes.

"Mac hopped on his 4x4 and must have been doing 90 (mph)!" Miller said. "He made it through barriers and through floodwater and was here helping me."

But it wasn't just childhood friends who stepped in to help, said Miller. Parents of his children's friends, as well as neighbors, came to the rescue.

"Strangers began to show up out of nowhere," Miller said. "There were plumbers with equipment who came. Neighbors came to dig trenches to help divert the water."

Before the flood, I was hard in my heart, but it took a storm breaking down my wall to break something in me to know that I can trust again. I needed a giant river to rock me, and I'd do it again in a heartbeat.

After what Miller said was about two hours, the water started to slow down to a trickle, and he could better assess the damage, which was significant. However, Miller said that the experience during the storm and in the weeks following is something that he would do again in a heartbeat.

"Before the flood, I was hard in my heart, but it took a storm breaking down my wall to break something in me, to know that I can trust again," Miller said. "I needed a giant river to rock me, and I'd do it again in a heartbeat."

Like many in the Cedar City area who were affected by the flooding, the Miller family doesn't have flood insurance to cover the damage. And when asked if there was a fund set up to help with the repairs, Miller was quick to say he wasn't looking for financial help.

"We're not a charity case," Miller said. "I just got back from the bank to extend our loan to help cover the damages. The drywall people are coming to start working on the basement in a few days. I'll work till I'm 90 if I have to. What I have learned from this experience about the kindness of people, has been priceless, and I'd do it all again."