Hannah Archuleta is suing Utah's Turn-About Ranch after she says she was punished for reporting assaults by a male employee when she was 17. But time limits and money caps are hindering her case and other legal cases taking aim at Utah's teen treatment programs. (Courtesy of Gloria Allred)

SALT LAKE CITY — One teenager said she was sexually assaulted by an employee of a ranch for troubled teens, while another shattered his knee during a wilderness therapy outing.

Their experiences were different, but both hit the same roadblock in recent weeks.

Separate courts have determined their lawsuits against the Utah programs fit medical malpractice claims, capping how much money Hannah Archuleta can be awarded if she wins at trial, and throwing out Jacob Scott's case because he sued after a deadline that's tighter than in other sorts of cases.

Utah lawmakers upped oversight for youth treatment facilities earlier this year after former residents — including celebrity Paris Hilton — came forward with stories of abuse and neglect. As more like them seek recourse in the legal system, the stalled lawsuits illustrate how difficult the effort can be.

"There is just not a lot of precedent on how you effectively litigate these cases," said Michael Young, an attorney representing women suing a treatment program for girls in Sandy. "The medical malpractice question is a a big question that's hanging out there: At what point are you providing a therapeutic modality?"

Hannah Archuleta's legal team was surprised when a judge in Garfield County sided with Turn-About Ranch in June, saying Archuleta's allegations were tied to her therapeutic treatment there. The ranch has denied wrongdoing.

The night watchman she alleged groped her twice in a kitchen when she was 17 years old wasn't providing medical care, her attorneys contend. But Archuleta also alleged Turn-About Ranch punished her for reporting what happened, including by forcing her to work outside in freezing temperatures. The judge noted ranch labor was part of her therapy plan.

"We'll certainly be arguing at some point that some of these acts are not covered by the medical malpractice statute," her attorney, April Hollingsworth, said. 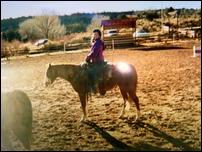 A Utah judge has dismissed a Colorado woman's allegations of assault and retaliation against Escalante's Turn-About Ranch, but the ruling allows her to bring the suit again at a later date.

Archuleta's case can move forward again after she presents it to a state panel that reviews malpractice cases and issues nonbinding decisions. But if she wins at trial, she's limited in how big a financial award she can take home.

Utah doesn't limit how much a person can recover in lost wages or medical bills, but it caps financial awards to compensate for pain, suffering or inconvenience to $450,000.

It may sound like a big payout, but payment to expert witnesses can eat up half the cost or more, said Phil Elberg, the New Jersey attorney who led out nationally in suing certain centers on behalf of former residents harmed by the programs. And it's a fraction of the sum attorneys can bring in from other sorts of cases.

"They're framed in terms to prevent runaway verdicts," Elberg said of the limits. "What they really act as is a disincentive for lawyers to take on cases."

The time limits to bring a malpractice case also are tighter than most, under the thinking that it's not fair for health providers to have legal claims looming for many years. Those who were minors generally have until their 20th birthday to take a case to court; after that, they have another two years if a repressed memory surfaces.

It's a quick window, Young said. Many young adults haven't yet come to grips with the trauma they endured and may be dealing with other mental health issues.

"In terms of treatment centers benefiting from the medical malpractice act that is the hugest obstacle, is these kids literally have no time," he said. "They have very little time to figure things out and file a lawsuit."

Jacob Scott is out of time, according to the Utah Supreme Court. He was 17 when he fell 25 feet and shattered his knee during a group hike with a wilderness therapy program and later sued for negligence — but did so after he turned 20.

In terms of treatment centers benefiting from the medical malpractice act ... these kids literally have no time. They have very little time to figure things out and file a lawsuit.

In an opinion released earlier this month, the justices determined the hike that day was part of his therapy plan at Wingate Wilderness Therapy.

"We think they reached the right decision here," said attorney Nathan Crane, who's representing the treatment program. "He was at Wingate for treatment, and he was engaged in that treatment plan when he was injured."

Scott contends employees allowed him to climb a towering snow-covered rock formation in southern Utah and told him how to descend before he lost his footing.

He appealed his case after a federal judge in Salt Lake City dismissed it, and the the federal appeals panel sent the malpractice question to Utah's high court to decide. Crane said he expects the appeals court to agree and dismiss the case.

Meanwhile, Archuleta is planning on bringing hers again.

State Sen. Mike McKell, the Republican from Spanish Fork who carried this year's reforms, said the recent ruling in her case seemed "bizarre" to him.

McKell, also a personal injury attorney, said he supports giving people like Archuleta more time to sue. But he acknowledged it would prove to be an uphill battle and would meet widespread resistance from health care providers.

"I've always felt like two years are too short," he said. "I think that would be a very challenging fight, and one that goes well beyond this industry."