SALT LAKE CITY — Motivated to come forward after Paris Hilton's allegations of abuse at a Provo center for troubled teens, a Colorado woman is suing a different Utah program.

Turn-About Ranch in Escalante punished Hannah Archuleta after she reported sexual assaults by an employee, she alleges in her lawsuit filed Wednesday in Garfield County's 6th District Court.

Archuleta joins Hilton and several others now advocating for better state oversight of the centers where they say employees victimized them, but they couldn't get help because they didn't have access to the outside world.

"There appears to be a major problem in Utah," Archuleta's attorney, Gloria Allred, said in reference to the residential rehab facilities for teens.

The ranch denied the allegations in a prepared statement, saying the girl and her father weren't willing to participate in its inquiry. It called the lawsuit's account of events "incomplete, to say the least" and said it would not take any allegation of mistreatment lightly.

"Though Ms. Allred's office has spent months soliciting a cash settlement, we were unaware that a suit would be filed," the statement says. "We interviewed other students and staff members and were unable to corroborate her story."

SB127, which awaits a vote in the House, would require the treatment centers to submit monthly reports to the Utah Office of Licensing, among other changes.

Archuleta alleges she was whisked to the ranch in southern Utah in 2019 when she was 17, just after appearing on a TV segment of "Dr. Phil," a proponent of Turn-About who recommended the program to her family.

She says she was too scared to tell anyone the first time the man groped her in a kitchen about a week and a half after she arrived.

"As an adult with control over Ms. Archuleta, he made her feel powerless," her lawsuit says.

But after the same employee "aggressively" and inappropriately touched her in late November or early December 2019 while she was retrieving a dish from a cabinet, Archuleta told three employees about the incident and was told to write a detailed letter describing the assaults, according to the lawsuit.

She provided the letter to someone in management and described what happened, but claims in the lawsuit that the man she identified as her aggressor didn't face meaningful discipline and the ranch didn't notify police. 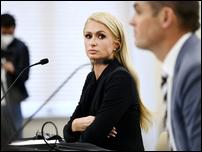 Three days after Paris Hilton testified in front of a Utah legislative panel about the abuse she suffered as a teen at a Utah facility for troubled teens, the state Senate is poised to pass a bill to place tighter restrictions on those facilities.

Rather, its staffers forced her to sleep on a wooden plank with no pillow, verbally abused her, threatened violence and forced her to work outside in below-freezing temperatures, the lawsuit says.

She claims she was denied access to the bathroom and was assigned her "reflection" time, which consisted of picking up horse manure, walking in circles around a horse corral for hours, or staying at a desk facing a wall for hours.

One employee, a "residential coach," accused Archuleta of lying "because you're crying so much" and "only liars cry," the suit says.

The man remained at work and had one-on-one interactions with other girls, despite another also reporting that he sexually assaulted her, Archuleta alleges in the suit.

The ranch said it cooperated with the sheriff's office, "but without further contact with the accusing party, our options were limited."

She's suing for negligent hiring and supervision, assault, battery and intentional infliction of emotional distress, and she's seeking damages to be awarded at trial.

Allred says she hopes Archuleta's case will lead others who have had similar experiences to assert their rights in Utah and across the country.

The ranch is facing an earlier lawsuit from the widow of a counselor who was beaten to death by a teenager who was suicidal and addicted to drugs in 2016. The suit alleges the ranch wasn't equipped to handle someone with those issues.