Thunderstorms are popping up in parts of Utah — can the moisture tame the drought?

SALT LAKE CITY — While the National Weather Service in Salt Lake City is warning that thunderstorms could continue to pelt areas of the state with heavy rain through Thursday, that moisture won't make a dent in the drought.

Even if Mother Nature dumps nearly a foot of rain across the state.

"The state has had around 17 inches of precipitation this water year. During an average water year, we would have received almost 27 inches to date, so we currently have a 10-inch deficit that we need to make up to get back to normal," said Kim Wells, public information officer for the Utah Division of Water Resources. The water year runs from Oct. 1 to Sept. 30.

"The heavy storm we had in a few spots in the state yesterday makes a very small dent. We would need that 10-inch deficit averaged across the entire state from Box Elder to San Juan from now to Sept. 30. However, that's looking at numbers only. When, where and how the water falls makes a difference."

Utah gets about 95% of its water from snowpack, and this last water year it simply failed to show up.

Utah will need a booming year for snowpack to mitigate the effects of this prolonged drought, which features extremely dry soils, record-scorching temperatures and reservoirs that are shrinking day by day.

"The total average precipitation is about 32 inches for the entire water year, so we would need those 10 inches to fall during a time when we typically receive around 5 inches," Wells said. 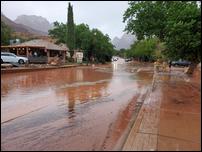 Officials in Zion National Park are mounting a cleanup effort after a series of flash floods washed over southern Utah Tuesday.

The storms also bring worries of increased fire activity due to lightning strikes.

While the storms might green up some parched lawns and bring a measure of wet relief, the plan of action should have all eyes focused on this fall and winter with the familiar refrain: Think, pray and beg for snow.

Water from short intense storms tends to run off rather than soak into the soil where plants can access it. Plants and wildlife will need longer to recover. Crops and native vegetation have already been lost this year due to drought. Native vegetation may have died or not germinated for next year, she stressed.

Wells added that even an average year of precipitation will not completely wash away the drought.

"Having a string of wet seasons over the next 12 months is what we need to get us back on track."