Why Salt Lake City's mayor just raised pay for police, and why she says some people won't like it

Standing outside her office at the Salt Lake City-County Building during a news conference, the mayor announced the big pay bumps for police — nearly 30% for entry-level officers and 12% for senior-level officers — along with more modest pay raises for other union-represented city employees.

Mendenhall, who has said a slew of reforms in Salt Lake City amid the nationwide reckoning in wake of George Floyd's murder are only a "beginning," said the pay raises negotiated with the Salt Lake Police Association were needed and necessary to make Salt Lake City a competitive agency that doesn't keep losing police officers — whether that's for better pay or because of morale issues amid today's charged political climate.

"This is a bold market adjustment that has been years in the making," Mendenhall said. "And it's really to avoid what is becoming a public safety threat to our city."

The mayor acknowledged there are likely "some who will be angry with this decision," but she said "there's a reason" it was backed by leaders from the city's new Commission on Racial Equity in Policing.

"This is a necessary step to do the work that they are helping direct to keep our city safe," she said, while also saying Salt Lake City "enacted the largest reforms that have ever happened" in the city's police department in wake of Floyd's murder.

Still, the mayor said she does expect blowback after the city — and the nation — have faced calls to "defund" the police. She addressed those calls in plain terms.

"Decreasing the funding for a department who is already struggling to retain and recruit officers ... is an illogical and backwards step," Mendenhall said. "Defunding the police isn't something that I've ever supported." 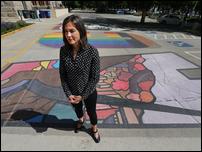 Mendenhall pointed to city officials standing behind her — including Salt Lake Police Chief Mike Brown, some members of the city's Commission on Racial Equity in Policing, and Salt Lake City Fire Department leaders — as she continued on.

"I think the people behind me would agree that in order to make the changes that we want and need to make together, and just to do the fundamental work of answering calls for services that this city asks our officers to do, we can't do that with fewer people," the mayor said. "We've seen the results of that."

The Salt Lake City Police Department is currently down 63 officer positions, according to Brown.

Some retired. Some left for higher pay at other departments. Others have left amid what police union representatives have said has been low morale because they didn't feel supported by their city.

"If we as a city want the best employees, we can't pay them below market. We just can't," Mendenhall said. "When Taylorsville announces that it needs to staff its brand new police department and is paying between 5% and 23% more than we do, of course some of our officers are going to go join and take that opportunity. And many of them did."

"I don't know about you," the mayor added. "But I'm tired of training people — paying to have them trained and then having them poached by other cities."

To Salt Lake City police's union, the pay negotiations could not have turned out better.

"We have no complaints," said Joe McBride, a Salt Lake City police officer and president of the Salt Lake Police Association. "It was everything we could have hoped for — and more."

They're the largest pay bumps for police in recent memory, McBride said, noting he believes they rival if not exceed a substantial pay raise implemented under former Salt Lake City Mayor Deedee Corradini's administration in the '90s.

Currently, entry-level Salt Lake City police officers start at about $21 an hour. With the pay raise, now they'll start at over $26 an hour, McBride said. For senior-level officers, their pay will go from about $35 an hour to over $39 an hour.

"That's a huge bump," McBride said, describing the pay increase as a major recruiting tool that will not only help bring on new talent, but keep them at the city longer in their careers.

Decreasing the funding for a department who is already struggling to retain and recruit officers ... is an illogical and backwards step. Defunding the police isn't something that I've ever supported.

The pay raises have been needed for a long time, McBride said.

"This is the capital city," he said. "(Salt Lake police) deal with things that no other city deals with. So to feel like now we're paid fairly for what we're asked to do, it's a huge uplift for morale for the guys.

"The last year has been really rough," he added, "and to have these numbers come in and to put us at the top of the pay scale and have officers feel appreciated from the city, recognized for the hard work that they do, it's been an incredible lift for morale."

The Salt Lake Police Association, along with the Fraternal Order of Police, has been a vocal critic of Mendenhall, pushing back on some of her police policy reforms and accusing her of not supporting her police officers.

Asked if the pay raises will address morale issues within the Salt Lake City Police Department, McBride said it's "a big step."

"Showing public support, saying we have to have police officers in Salt Lake City, that we want to retain the best and we want to hire the best, and to have them say that and actually stand behind that and put us at the top of the market, it really has been a big step forward in showing officers ... that the city stands behind our officers," McBride said.

There is still more to do, however, to improve police morale, he said.

"There's always things we have to do to improve on that," he said, noting that until Salt Lake City's 63 vacancies are filled, police officers will continue to feel short staffed. However, he said the pay raises have made it feel "like we're finally over the hump of the last year."

The pay raises for police — along with a 4% across-the-board pay raise for Salt Lake City firefighters and a 4.5% raise for other union-represented employees (including Salt Lake City employees, maintenance crews, waste and recycling workers and 911 dispatchers) — already have backing from the Salt Lake City Council. 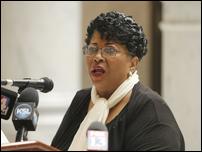 How is the state doing with justice reforms nearly year after summer of protests?

Utah Department of Public Safety Chief Brian Redd said the death of George Floyd in Minneapolis last year and the nationwide protests that followed made clear that Utah leaders needed to find the right ways to respond.

The council in a special meeting on Monday approved $9.1 million out of the city's fund balance to fund all those pay raises, along with memorandums of understanding between the city and the unions backing the increases.

"As capital city, we need to be paying all of our workers that capital wage," Fowler said. "We demand, in some ways, as residents that live in a capital city, a lot from our employees, and so we should compensate them adequately and fairly."

Fowler also said she expects some blowback for some who will be upset by the pay raises for police, but she said "I do believe it's the right thing."

"As the mayor said, the No. 1 goal of elected officials of a city is to make sure that people are safe and healthy and have access to resources," she said. "And we can't do that if that first part of safety can't happen if our first responders and public safety is not being taken care of."

Brown, in an interview with the Deseret News after Mendenhall's announcement, was all smiles.

"It's huge," Brown said. "Even as we speak right now, there are officers out there responding to very difficult, dangerous situations. Just last year, we responded to 123,000 calls for services. There is not a department in this state that does what we do. Nobody responds to that many calls."

Brown added: "We expect our officers to be the best. Today, we are paying them for the service and what they bring to the city. We're paying them as the best officers in the state."