SALT LAKE CITY — With COVID-19 apparently finally on the outswing, Utahns may be breathing a sigh of relief for a freer summer season, but health officials warn that vigilance is still required for another virus: West Nile.

Experts are concerned, as more than double the expected number of mosquitoes hatched north of Salt Lake City this May. A recent survey by the Salt Lake City Mosquito Abatement District measured 960 mosquitoes in the rural zone — a sharp deviation from the 400 expected from an average of the last five years.

This sharp increase is likely due to the melting snow from mountains around the Salt Lake Valley that is trickling down into marshier areas at their base. The water stays there, impounded and stagnant, and becomes a perfect breeding ground for mosquitoes as temperatures warm.

The industrial surveillance zone, housed between Salt Lake City International Airport and state Route 201, also saw a 75% increase in mosquitoes over the average. Any of these mosquitoes could be carrying West Nile virus, and the only way the Department of Health can tell this is through population surveillance and testing.

Unlike last year, when COVID-19 complicated the process of testing for West Nile in mosquitoes, testing is anticipated to continue as usual throughout the summer, as more broods hatch and more of the department's employees get vaccinated.

As of Thursday's West Nile testing update, no cases have been reported in mosquito pools or in humans.

"We don't want people stressing out and staying indoors all summer," said Hannah Rettler, zoologist and vector-borne epidemiologist with the Utah Department of Health. "We just want people to be aware of mosquito areas. It's about knowing what your risk is and knowing how to protect yourself. Then there's no need to sit and actively worry."

This year vs. last

Though West Nile only infected two Utahns in 2020, Ary Faraji, executive director of the Salt Lake City Mosquito Abatement District, said that due to the nature of both West Nile virus and the mosquitoes that carry it, one year of few cases means little for the next year.

"A lot of these viruses are cyclical in nature," Faraji said. "Some years may have a lot of positive cases, and in some years, by natural ecological cycles or intervention, we see reduced activity. But these pathogens are never going away."

In fact, the cyclical tendency of the disease is one of the main reasons it seems to be "forgotten" come summer. Residents may remember a slew of good years, trek out into nature as the temperature rises, and keep mosquitoes in the back of their mind until they're faced with one, Faraji said. By then, it's too late to go back and grab repellent, and one bite can be enough for a potentially dangerous infection.

West Nile virus is transmitted through the bite of an infected mosquito, but the disease itself isn't in a state to infect most humans right now. It has to be maintained between bird-biting mosquitoes and birds; an infected mosquito bites a bird, which amplifies the disease, and then another noninfected mosquito contracts the amplified disease from that same bird, amplifying it again in turn. This positive feedback loop means that it will take a few months before the virus builds up in mosquito pools. According to Faraji, we likely won't see infected pools until the end of June.

This isn't to say that the virus cannot be circulated before then, however, especially in high-risk groups. The point of testing in the early months of May is to see the field infection rate of transmission, or how fast the disease is spread among mosquitoes. If they reach a threshold of infected pools of mosquitoes, the abatement districts will need to increase control efforts to stop transmission. These efforts can include setting traps, managing water drainage systems to remove standing water, and physical screens on rain barrels to control the amount of larvae and pupae gestating in them. 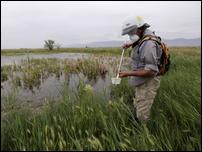 Does spraying pesticides to control mosquitoes near Great Salt Lake do more harm than good?

Some physicians want all mosquito spraying stopped in Utah, claiming alleged harm to residents, but state officials reaffirm their methods of application are safe.

Unlike the novel coronavirus, there is no vaccine to prevent West Nile virus, nor are there medications designed to pinpoint the disease itself. Some symptoms of the infection, like a fever or headache, can be treated with bedrest, intake of fluid, and over-the-counter pain relievers.

However, about 1 out of 150 infected people develop serious symptoms, which can include muscle weakness, convulsions, vision loss, numbness and death. Individuals above 50 are at greater risk, along with those who have certain medical conditions or have received organ transplants.

"We may experience reduced transmission or reduced cases," Faraji said. "But because of the fact that it's still out there, we need to be vigilant, have an established control program, and educate the public on what they can do to reduce personal risk."