SALT LAKE CITY — Some GOP members of Congress say it is federal and state policies that are the main culprit behind the unprecedented drought gripping the West, not just the weather.

And while Utah's Republican Gov. Spencer Cox agrees with them that more water infrastructure will help Utah and other states be better prepared, he is taking steps to now ensure Utahns conserve what precious water the state has.

A webinar convened Wednesday by the GOP members of the House Committee on Natural Resources detailed the extreme water shortages that many say is a worst-in-a-lifetime event idling farms in regions that stretch from Oregon into Utah and New Mexico.

"Droughts are nature's fault, they happen; water shortages, that's our fault," said Rep. Tom McClintock, R-Calif. "They are a choice we made when we stopped building dams and reservoirs. ... We are not going to solve our water shortages until we build new facilities. We are a special kind of stupid."

McClintock's remarks came a day before Cox stressed the dire situation in the Beehive State during his monthly news conference on PBS Utah in Salt Lake City.

Cox, who owns an alfalfa farm in Fairview, Sanpete County, said they're limited on water "like we normally are in July or August." Most Utahns live in areas where they should only be watering once a week, he said, but "most of us water way too much and that's actually not healthy for your lawn."

The state's political leaders, however, are taking action.

During the special session of the Legislature Wednesday, lawmakers voted to extend the drought state of emergency into October, when the 2021 water year will end.

That emergency declaration will free up state and federal resources for the agricultural community, but it won't deliver on much needed precipitation.

"While we cannot legislate water, we can be better prepared," said House Minority Leader Kevin McCarthy, R-Calif., during Wednesday's event.

McCarthy, other GOP members of the committee and some water managers bemoaned what they call burdensome federal regulations such as the Endangered Species Act that have reduced water available for consumptive use in favor of letting it flow unused to the ocean.

"There is no evidence that drying up of agriculture is doing the fish any good," Boyd said.

Boyd and others pointed to the foresight of the federal government at the turn of the 20th century to invest money in infrastructure like dams, canals and pipelines to move water where it is needed the most and to store it in times of drought. 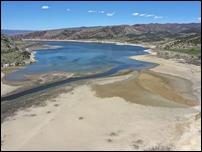 As water managers warn of 'worst on record' drought, what do people think should be done to save water?

Utah and the rest of the West are headed into the summer facing extreme drought conditions and calls for water conservation are only going to heat up as temperatures climb.

Modern day efforts to make similar efforts have been stymied by red tape and lawsuits, they said, adding it has left the West vulnerable.

That sentiment was echoed by Jason Phillips, chief executive officer of the Friant Water Authority in California.

"The water shortages in this state are caused by policy decisions. The fact that the water year is dry and there is not a lot of water, that is weather," he said. "But the fact that hundreds of thousands of prime farmland this year are going to be left fallowed or ripped out of the state and the farm-based communities throughout will be left with little to no drinking water, that is caused by policy decisions."

Policies, Cox stressed Thursday, will help Utah in these dry times, especially focusing on the need for additional conservation. He added he met with House Speaker Brad Wilson, R-Kaysville, and Senate President Stuart Adams, R-Layton, this week to discuss ways to implement water-saving strategies on the state level.

"We are going to be working at putting resources behind a significant conservation push," he said, adding that won't just be for this year, but long term.

The governor said he could envision a changing landscape for Utah, "where in new developments we would be eliminating park strips, looking at xeriscaping much more. There's so much more we can do here in the state of Utah."

Still, like those participating in the congressional discussion, Cox acknowledged the need for new infrastructure projects.

U.S. Rep. Blake Moore, R-Utah, said during the Wednesday forum that the drought sweeping across Utah is debilitating beyond what most people can imagine.

"Utah is in the midst of a very, very significant drought which poses a challenge for every individual and industry in Utah," he said.

But Utah's leaders have come under intense criticism from proposed infrastructure developments that include the Lake Powell Pipeline and Bear Lake Development, both state-sanctioned projects that develop additional water resources for the future.

Critics say state officials could save the water they plan to divert by pricing it appropriately and forcing more conservation.

Tage Flint, general manager of the Weber Basin Water Conservancy District — one of the critical players behind the Bear River project — told the congressional webinar that it was water development projects developed early in the 20th century that helped Utah and the rest of the West survive drought conditions.

But, he stressed — for generations to come in the nation's fastest-growing state — that same type of foresight needs to be in play.

"In my career, this is the worst (drought) and I have been doing this a long time," he said.