But he was also vague on what bills will have more difficulty winning approval from him and the Utah Legislature as a whole, saying the process needs to play out.

"Lawmakers all have different perspectives," Wilson, a Republican from Kaysville, told reporters. "But we are going to make, I think, a lot of progress this year in this space."

"I support ... these bills," Wilson said. "They're good policies that we need to advance. So I'll be voting for them."

Wilson invited the two Democratic lawmakers sponsoring those bills — Rep. Angela Romero, D-Salt Lake City, and Rep. Andrew Stoddard, D-Sandy — to join him in answering questions from reporters about those and other police reform bills on Wednesday.

Romero's legislation — the bill to require 16 hours of de-escalation training and the bill to require use-of-force data collection — won unanimous approval from a House committee last week, and now head to the full House for consideration. Stoddard's bill to enact criminal penalties for police officers who inappropriately share intimate images is still waiting for a hearing.

But those three bills are only a fraction of the dozens of police reform bills that have been filed by lawmakers this year after a summer of unrest following the killing of George Floyd in Minneapolis last May.

Many more are still waiting for action, including more ambitious bills like HB237, which would narrow the justification in statute for a police officer to use lethal force to include both of the words "reasonable and necessary" and not just "reasonable." Its sponsor is Minority Assistant Whip Jennifer Dailey-Provost, D-Salt Lake City. Its first hearing is scheduled for Thursday.

Wilson, asked about Dailey-Provost's bill, said he hadn't seen it yet, adding, "We'll have to watch that go through committee." He didn't take a position on it.

Another is HB154, sponsored by Rep. Kera Birkeland, R-Morgan. It would require an officer who watches other officers violating procedures to intervene and then report it. It also would change state code to specify a police officer is permitted to use deadly force when an officer is facing "imminent" threat of death or serious bodily injury. Additionally, it would require an officer to, if feasible, identify himself or herself as a police officer and "give clear verbal warning of his or her intent to use a firearm or other physical force," as well as attempt to de-escalate the situation before resorting to deadly force. 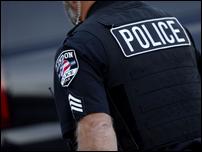 Utah police reform bills are inching along, but one 'tame' bill has already stalled

A handful of police reform bills are inching their way through the Utah Legislature, but at least one — even though its sponsor argued it was a relatively "tame" attempt to hold officers more accountable — has already hit a roadblock.

Numerous other bills have been filed, from Rep. Mark Wheatley's HB74 to allow cities to create police oversight boards, to another one of Stoddard's bills, HB62, which would allow a police officer's certification to be suspended or revoked for "conduct involving dishonesty or deception or violation of employer's use-of-force policy."

Earlier this week, HB62 stalled in a House committee on a split vote to Stoddard's surprise after one lawmaker raised concerns, even though Stoddard considered it a "tame" bill that had support from law enforcement groups.

Stoddard on Wednesday told reporters he's working on changes to the bill and expects to bring it back in front of the committee next week.

"So that's the process," Wilson said, adding that he was "glad to hear" Stoddard's bill would be revived.

Wilson sought to emphasize that Utah's approach to police reform won't depend on party affiliation. To make that point, he listed off several recent headlines in local news, including the story about the former University of Utah police officer who showed off explicit photos of McCluskey, a headline about the killing of George Floyd, a headline about 21 police officers injured in Salt Lake City riots, and an Ogden police officer who was killed after responding to a domestic violence call.

"Let me be clear. We don't think any of these are acceptable," Wilson said. "This is problematic for our state and our citizens. The safety and the security and the equal treatment of all Utahns is really important to the Legislature, regardless of which party members come from."

Rather than passing sweeping reforms, Wilson said lawmakers are aiming to get at the "root cause of these issues" by focusing on issues including education, mental health and housing.

"Sometimes lawmaking — not here in Utah, of course, but lawmaking in other places — can sometimes hack at the leaves of issues, but we want to talk about getting at the roots of some of these problems," he said.

"So we do know that expanding opportunities in health, education and housing are important," he said. "But that's not going to be enough, right? We need to provide opportunities for law enforcement and our public safety officials to do and receive the training that they need to do their jobs well."

Asked where he draws the line on what police reform bills he'd support, Wilson didn't give specifics.

"I think we've cast kind of a broad net in terms of the issues we're focusing on," Wilson said. "We have some big themes this year. We want to make sure we're providing housing opportunities to people so that they have a place to live. We're putting a lot of resources into mental health so we kind of fend off a lot of these issues before they come up. And then you've got the work we're doing to try to have de-escalation with mental health issues with individuals and police.

"Those are all things that matter a lot to us," Wilson said. "But there are some policies that we probably need to work on over the interim, and we'll continue to do that."

With so many police reform bills having been filed, Wilson said legislative leadership is working to "get everyone on the same page" as the bills go through the legislative process.

"We're all vested in this," he said. "We care about this regardless of where in the state we're from or what party we come from or how long we've been here. It's been a really fun thing to watch this work progress over the last six months in the face of very difficult circumstances — that was a bright spot."

Wilson, however, sought to make clear "law enforcement is not the only group that needs to be held to a high standard of civility."

"The citizens need to do that as well," he said. "We've seen some cases where destruction of property or violence in our state have not been OK. And we need to also do better as a state ... on those types of issues."

He also noted that the "vast majority" of police in Utah are "hardworking, dedicated, public servants who are doing incredible work, and we appreciate them and value them more than words can say."

Romero, asked whether the Utah Legislature will do enough this year to quell the demands for reform in wake of Floyd's killing, said, "For some people, it probably won't be enough."

She noted that she has even received pushback against her de-escalation training bill because its critics say it's not doing enough.

"But I think we're heading in the right direction," she said. "And when you bring 75 people together in the House and 29 people in the Senate, you're not always going to get everything you want."

But Romero said the aim is to make sure "we're working together" after Floyd's murder "to show Utah that we can come together on certain issues."

"Will there be issues we agree on all the time? No," she said. "But I think that's how the process works and that's why I always encourage people to get involved."