PROVO — A 19-year-old woman was hospitalized after she was injured going over a ski jump she and her friends had built just above the Aspen Grove Trailhead on Sunday, according to the Utah County Sheriff's Office in a press release.

Utah County Sheriff's Office Search and Rescue team, along with North Fork Ambulance personnel responded to the scene after they received the call around 5:30 p.m. reporting that the woman was complaining of difficulty breathing, back pain, and rib pain after injuring herself on the jump. Search and rescue officials planned on using a medical helicopter to transport the woman from her location to the trailhead, where the ambulance would be waiting. But they later determined that due to the severity of the woman's injuries, she'd be transported by medical helicopter to the hospital.

The woman was transported to Utah Valley Hospital in Provo where they determined that she had three broken ribs and a collapsed lung. The woman was placed in the Intensive Care Unit and is expected to survive her injuries.

The woman and her four friends were in a known avalanche runout zone on a high avalanche danger day, according to the Utah County Sheriff's Office. The Utah Avalanche Center had issued a warning on that day saying that avalanche danger was high in that area.

According to the sheriff's office, the accident occurred in the same area three young men were buried in an avalanche on Dec. 29, 2003. The avalanche killed the three men and caught around 15 people who were able to dig themselves out. The three men didn't have avalanche beacons, probes or shovels. The press release emphasized the importance of checking the conditions and avalanche forecast of an area you intend to use and carrying the proper equipment if an avalanche were to occur. 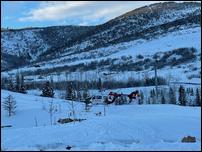 Officials on Sunday recovered the body of a Park City man who died in a Summit County backcountry avalanche the day before.

Officials said in the release that while having equipment won't keep you from being caught up in or buried by an avalanche, it increases the likelihood of you being found and surviving.

To check the conditions of an area you plan to use visit the Utah Avalanche Center's website.

Further information, including the identities of those involved in Sunday's incident, was not released.