SALT LAKE CITY — An inmate in the Utah State Prison is suing the Utah Department of Corrections in an effort to stop the shuffling of large groups of prisoners from one building to the next.

Damon Crist says the practice spurred widespread COVID-19 outbreaks at the prison starting in October. The spread has continued in the following months, infecting more than 2,600 inmates, including 12 who later died.

"I'm not asking for money damages. I'm not asking to be released," Crist told the Deseret News during a phone call from the prison's Draper site. "I'm just saying, 'Look, the department is moving people recklessly. It's causing mass outbreaks and it's infecting and killing people.'"

Crist joins other inmates in alleging his requests to see a doctor or nurse have gone unanswered. And his lawsuit comes amid calls for an investigation into how the prison has handled outbreaks.

Crist says the prison's handling of the virus amounts to cruel and unusual punishment for inmates and violates a ban in the Utah Constitution against "excessive rigor" for those incarcerated. The prison is also going against its own policy of employee conduct that compromises the safety of staff and inmates, he said.

In one example, employees instructed a sick inmate who was short of breath and blacking out to "breathe deeply," Crist said in his lawsuit.

He alleges deliberate indifference on the state's part, a legal standard considered the threshold for successful legal claims against jails and prisons. They're generally found to be liable only if it's clear they knew the medical care was inadequate, Wolovick said, creating an incentive for those in authority to avoid scrutinizing the care. 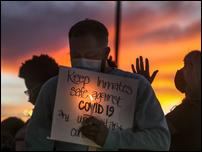 Utah's inmates are slated to get the coronavirus vaccine in March, part of a second wave following medical workers, teachers and patients in long-term care facilities.

"The legal landscape for medical care for incarcerated people rewards ignorance on a practical level," Wolovick said. But an outside review could provide specifics, she noted.

A spokeswoman with the Utah Department of Corrections declined comment, citing the pending legal action.

The agency has said it takes many factors into account when moving those in its care to new areas and works with state and county health officials in deciding how best to separate inmates who test positive from those who test negative for COVID-19.

Crist says an initial Oct. 23 move brought several with COVID-19 to the Lone Peak facility, where he was living at the time, he alleges in a handwritten petition for extraordinary relief, filed last month in Salt Lake City's 3rd District Court. During the course of the moves, negative and positive inmates were in same dormitories for hours, he said.

"Not one of the transferred prisoners was tested for COVID-19, or even questioned if they were exhibiting symptoms," he said in the lawsuit.

It was a matter of days before he fell sick with a cough and fever. Crist said he tested positive the first week in November, but continues to have trouble breathing and has brain fog.

Some around him struggled to get out of bed, he said, while others have no symptoms.

A total of 1,065 prison inmates and 63 staff members are considered to have active cases of COVID-19, according to the department data from Tuesday, the most recent available.

He alleges the Utah Department of Corrections doesn't have the resources to handle massive outbreaks, with some nurses administering several COVID-19 tests without changing gloves.

Judge Keith Kelly ordered the department last week to respond to the allegations within 30 days. The agency has not yet done so.

Crist, a paralegal, said he's eager to complete his sentence for theft convictions so he can get back to work managing construction projects. He is seeking to halt the moves at least until inmates get a coronavirus vaccine. State health officials have said they expect the state's inmates to be inoculated in March.

Crist also wants the judge to order corrections employees to wear N95 masks, change gloves after each test, and institute a two-week quarantine protocol for any moves required because of a doctor's order or a significant threat.

Others have challenged coronavirus protocols for incarcerated Utahns, but the prior legal efforts have proved unsuccessful.

The ACLU and defense attorneys sued in April in an effort to force greater releases of those awaiting trial, older inmates and the medically vulnerable, but the Utah Supreme Court rejected the bid based on procedural grounds.

The justices found the groups lacked standing to bring the case, in part since they weren't directly affected by the jail policies.

A federal judge in Salt Lake City's U.S. District Court similarly threw out a lawsuit from federal prisoners being held in the Weber County Jail, but didn't bar them from reviving the case in the future.