Have You Seen This? Giant rat carries giant piece of pizza out of NYC subway, kind of

THE BIG APPLE — I had the great pleasure of living in New York City for a brief time. I lived in a tiny studio apartment in Harlem with my wife, which was about as expensive every month as our current mortgage. I worked about 12 hours a day at an internship that was unpaid. It was a real whirlwind, but a great experience.

One of the best things I got a chance to do was ride the subway to work and home every day. It was a highlight not because of the sweet smell, comfortable temperatures or the friendly faces, but because it made for some wonderful and odd stories.

The strangest things happen in the subway. The place is already miserable. It's dirty, smelly, hot and humid during the summer and crowded with frustrated people trying to get to their destination. I experienced a lot of different things on those train rides and some of them are not OK to print.

My point is, you come to expect anything and everything on the subway. That's why no one in this video of a man dressed as a giant rat carrying a giant slice of pizza up the subway stairs seems to care too terribly much.

I pretty much summed the video up for you right there. This is apparently Pizza Rat and this isn't his first appearance in the New York subway system. Sure, whoever did this is absurd and it makes you laugh, but Pizza Rat is not the star of this video and neither is the giant slice. Instead, it's the great citizens of Manhattan.

Notice how not a soul seems to really pay any mind to the ridiculousness of what's going on. The only one who really pays any mind is the man headed down the stairs, and he doesn't even seem to be thrown off. In fact, a giant rat doesn't phase him at all — he just wants to get down the stairs. So, the man jumps the railing and gets down so he can catch the express. 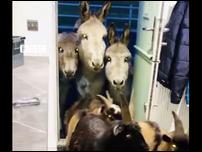 Coming home to a break-in is never fun, but sometimes it's funny.
×