For more information on all the fires, visit utahfireinfo.gov.

If you're on a mobile device and can't see the updates below, click on this link. 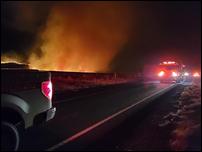 Here's the latest on various wildfires burning around the Beehive State on Monday.
Tuesday, 09:28pm

Knolls Fire in Saratoga Springs suspected to be human-caused