SALT LAKE CITY — Two women who helped find a missing 9-year-old boy after he approached them at a downtown Salt Lake City TRAX station said they’re grateful he made it home safely.

“This little boy approached Catie and asked for money,” said Lana Atwood, who was with her sister-in-law Catie Paulsen and their families when they bumped into 9-year-old Orson Bergeron at the City Creek TRAX station Wednesday night.

“I kind of looked around to see if there were other people – homeless people or whatnot – that were having him go ask for money, but there wasn’t anyone,” Atwood said.

The women said they were heading home after visiting Temple Square’s Christmas lights.

“He was on the platform, we were waiting for the next train,” said Catie Paulsen.

It was just after 7 p.m. and realizing the boy was alone, the women said another bystander jumped in to help them figure out where the boy’s family was.

“The three of us were asking him questions, asking where his parents were,” Atwood said.

“I said 'what do you need money for?' He said ‘I need money to get on the train to get a ticket,’ and I said, ‘well where are your parents?’ He said, ‘they’re not here but they gave me permission,” Paulsen said.

The women said the boy refused to tell them who his parents were and insisted they knew where he was and gave him permission to be out. They said the boy told them he was on his way to visit his relatives but didn’t know where they lived.

“We just knew something was wrong, it just felt off,” Paulsen said. “It was scary.”

Feeling something was off, the women said they followed the boy onto the next train with their families.

We just knew something was wrong. It just felt off. It was scary,

“He jumped on, so we all jumped on with him to make sure he wasn’t alone,” Paulsen and Atwood explained.

While Paulsen sat with the boy, Atwood said she pulled out her phone and called 911.

“Right when I gave them the description they knew exactly who he was,” Atwood said.

Orson Bergeron, who has special needs and was diagnosed with reactive attachment disorder, was last seen after coming home from school around 4 p.m. on Wednesday near Main Street and 630 North in Vineyard, according to Utah County Sheriff’s Office officials.

The boy’s parents reported him missing around 5 p.m. Wednesday, according to UCSO Sergeant Spencer Cannon.

Cannon said the boy left home without permission. Deputies suspect he walked two miles along the train tracks to the Orem FrontRunner station in Orem where he purchased a ticket, boarded a train and eventually ended up in downtown Salt Lake City where he approached Atwood and Paulsen.

“He showed us his two train stubs that he had taken a TRAX train from Orem to Layton, and then he had another one that showed him getting transferred to Salt Lake,” Paulsen said. 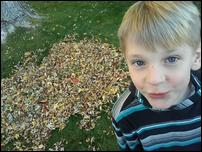 A 9-year-old boy who was last seen on foot about 3 p.m. on Wednesday in Vineyard was found safe in downtown Salt Lake City about 7:30 p.m., Utah County Sheriff’s officials said.

Considering the dangers he faced, Atwood and Paulsen said they’re grateful Bergeron made it home safely.

Cannon said the boy reported that he was heading to the nearby Megaplex Theatres when he left his home but changed his mind along the way and decided to visit family in West Valley City, walking instead to the FrontRunner station. Cannon did not have information on whether the boy had previous experience taking the FrontRunner.