State park rangers and sheriff's deputies were called about 2:30 p.m. Thursday after a passerby spotted the empty boat. When officials were unable to find the boat's owner, the Wasatch County Search and Rescue team also responded. 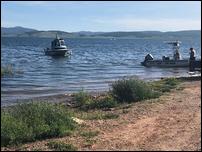 The boat's motor was still running and it appeared to have drifted to shore on its own. Wasatch County Sheriff Jared Rigby said a hat was found in the water and another near the shore.

On Saturday, the sheriff's office in a Facebook post thanked the Gardiner family for "their strength and kindness" during the search.

Sonar boat teams, Utah Search Dogs and Rocky Mountain Search Dogs were also aiding in the hunt, according to the office.

"Crews are continuing their search patterns late into the night, then resting until daylight. Thanks to the families of our Wasatch County Search & Rescue members, deputies and dispatchers who work to make all of this possible," the post said.