SALT LAKE CITY — The head of the San Juan County Democratic Party said the "abrupt" departure last week of the county's chief administrative officer wasn't a surprise and the man likely would have faced disciplinary action had he stayed on because he wasn't following County Commission orders.

"Mr. (Kelly) Pehrson had not been willing to take direction from the new County Commission and execute its priorities, and his abrupt resignation last week was not earth-shaking news," said James Adakai.

Pehrson resigned effective April 26 and took a job Monday with the Utah Department of Agriculture as its deputy director.

He told KSL that county government affairs were in chaos because newly elected Commissioners Willie Grayeyes and Kenneth Maryboy refused to meet with him or any other staff member and are running the county via resolution.

Both Grayeyes and Maryboy, who are Navajo, have been pushing and passing a series of resolutions drafted by Colorado-based attorney Steven Boos, former chief legislative counsel for the Navajo Nation, including one aimed at ousting San Juan County Attorney Kendell Laws.

Laws conducted an investigation into Grayeyes' residency at the request of one of his political opponents that a judge later determined legitimately qualified him for office.

Boos' relationship with the two men has been called into question by some San Juan County residents, and County Commissioner Bruce Adams, because of the type of influence an out-of-state attorney may be wielding in local politics.

In a telephone interview, Boos said both Maryboy and Grayeyes — men he's known for more than 25 years — have every right to have legal counsel of their choosing to help them navigate the legislative process.

"I am just their attorney, really. Legislators are allowed to hire attorneys to help them. Everyone does. The president of the United States has attorneys in the White House to help him navigate the legislative process. That is just the way the system works," Boos said.

Mr. (Kelly) Pehrson had not been willing to take direction from the new County Commission and execute its priorities, and his abrupt resignation last week was not earth-shaking news.

He said he is not getting paid for any of his work, and his communications with the two men related to San Juan County government affairs are protected, and subject to attorney-client privilege.

But residents Kim Henderson and Shanon Brooks have been openly critical of the relationship at commission meetings, accusing both Maryboy and Grayeyes of being influenced by special interests and lacking transparency.

Pehrson resigned after a terse April 16 meeting in which Maryboy referred to people in the audience as the "peanut gallery."

In a statement released Wednesday night, Maryboy said the county's lack of formalized polices and procedures led the commission to adopt the series of resolutions after he and Grayeyes took office "to provide structure to a government that was for all intents and purposes, operating on unknowable and undocumented 'internal' policies that Pehrson mentioned but never produced."

Pehrson, who was the county's chief administrative officer for six years, was lauded by Adams for his work ethic and management skills in a statement he released earlier this week.

On the heels of Pehrson's resignation, Maryboy attempted to schedule an emergency meeting for Thursday to appoint David Everitt, the current Moab city manager, to fill the position on a temporary basis. 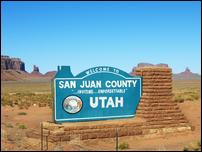 Kelly Pehrson, the chief administrative officer for San Juan County, has resigned to take a job as the state's deputy director of agriculture for a new opportunity —but also because he says the two freshmen county commissioners have either ignored him or froze him out at every turn.

He sent an email request for the meeting to Adams and Grayeyes, with an attachment of a proposed professional services agreement, that according to the website the Petroglyph, proposes to pay Everitt $5,763 every two weeks, or $149,838 a year.

Adams responded that he couldn't attend the meeting because he was headed to a Community Impact Board meeting Thursday in Salt Lake City, adding that position should be advertised and held for now by someone already on staff familiar with the county.

Approval of Everitt's job with the county is now on Tuesday's agenda of the County Commission meeting.

The political dynamics have toppled in San Juan County in the aftermath of the November general election in which Grayeyes defeated Kelly Laws and Maryboy beat Rebecca Benally, another Navajo.

The ballot box victories came after a 2017 federal court ruling in which the judge ordered redistricting that gave Navajo residents the majority of votes in two of three districts.

"Voters in San Juan County who supported Commissioners Maryboy and Grayeyes voted for changes in county policy priorities. Elections have consequences, and these two commissioners are committed to expanding representation beyond the Anglo power structure that has controlled public policy since its beginning."

"This is not racially driven. It is about transparency."

Amy Joi O'Donoghue
Amy Joi O’Donoghue is a reporter for the Utah InDepth team at the Deseret News with decades of expertise in land and environmental issues.