SALT LAKE CITY — A judge in Monticello has affirmed the election of a Navajo Democrat to San Juan County's governing board after his Republican challenger sued to remove him from office.

Attorneys for unsuccessful GOP candidate Kelly Laws argued that Willie Grayeyes lives across state lines in Arizona, invalidating his election to the County Commission. Grayeyes said he has a trailer and girlfriend in Arizona but no permanent home there.

Grayeyes, a member of the Navajo Nation, is a Utah resident registered to vote in the county since 1984, 7th District Judge Don Torgerson wrote in a Tuesday order. The judge said Laws waited too long to challenge his opponent's eligibility for office, missing deadlines in state election laws.

"It was the correct decision," Grayeyes' attorney, Steven Boos, said Wednesday. His client, 71, is "a very forgiving and laid-back guy in general. I imagine he just wants to get on with his work as a county commissioner," Boos said.

Laws had known of concerns about Grayeyes' residency since neighborhood caucuses in March but waited until after the election to sue, Torgerson wrote.

Laws' attorney, Peter Stirba, said his client "wishes the judge had come out with a different ruling than he did" and is evaluating a possible appeal.

Grayeyes has maintained a residence on Paiute Mesa, where he stays 60 percent to 80 percent of the time, often with his daughter or sister, the judge found. Grayeyes' home is reached by a rugged road that dips into Arizona, and he gets his mail and driver's license in the neighboring state because services there are closer, the judge wrote.

Grayeyes' livestock also graze there and he doesn't need to have one single house to be a resident, the judge indicated.

Torgerson also acknowledged Grayeyes' home in Navajo tradition, noting his umbilical cord is buried there and his family identifies it as their place of origin. 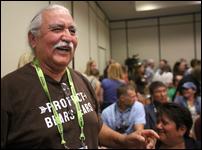 A Navajo man is winning a county commission race where he fought to get on the ballot for the first general election after a judge ruled that local voting districts were illegally drawn along racial lines.

A federal judge previously required the county to put Grayeyes on the ballot after finding a county clerk falsely backdated a complaint about his residency, but the judge didn't rule on where Grayeyes lives.

The new commissioner's swearing-in earlier this month tipped the three-member commission to a Navajo majority. His fellow commissioners are Kenneth Maryboy, also a Navajo Nation member and Democrat, and Bruce Adams, a Republican. Navajo residents make up the majority of the county's population.

The November election was the first after a different federal judge found San Juan's old voting districts were illegally based on race and created new ones.