Through a partnership with the Utah Transit Authority and U.S. Forest Service, the Utah Department of Transportation issued its Little Cottonwood Canyon Environmental Impact Statement in the spring of 2018 in hopes of understanding the complexity of the transportation problem and researching viable solutions.

Some of those problems include traffic congestion, limited trailhead parking, roadway capacity and avalanche-related roadway issues.

There are 2.1 million visitors annually to Little Cottonwood Canyon alone, according to John Thomas, UDOT project manager, and he said transportation issues are coming to a head.

Twice this year, Big Cottonwood Canyon closed to uphill traffic because of limited parking — something that hasn't happened before, Thomas said.

"How do we get fewer vehicles going up and down the canyon? And that will be one of the key aspects of the transit solution for our studies," he said Thursday at a news conference held in Big Cottonwood Canyon.

The Transportation Action Plan, the second study that began in March, is led by the Central Wasatch Commission through a partnership with UDOT.

It will look into transit, tolling, congestion, parking facilities, and pedestrian and bike facilities, with the goal of developing an action plan for short- and long-term improvements and solutions for the canyons.

Traffic is a top public complaint in both canyons, according to Jesse Dean, deputy director of the Central Wasatch Commission. The wait times can reach several hours, he said, which not only poses an issue for drivers, but residents in the area.

There's just not enough infrastructure in the canyons to support the people who are coming up.

"We have backups of traffic along Wasatch Boulevard all the way to I-215, and that's just creating a lot of congestion and impacts related to the entire area," he said Thursday.

He also said trailheads and restroom areas are "overburdened," not only in the ski areas, but in both canyons year-round.

"There's just not enough infrastructure in the canyons to support the people who are coming up," he said.

Possible transportation solutions being explored include tolling, buses, rail and a gondola system.

Dean said further details about potential tolls weren't yet known, such as prices, but he said a comprehensive approach to solving the problem is necessary. Simply adding a toll wouldn't solve these problems, he said, and further transportation solutions would combine with a toll if one was implemented.

Changes and improvements for the canyons will begin this summer, Thomas said.

Some intersections at the top of Little Cottonwood Canyon will undergo construction to help alleviate end-of-day traffic from the ski resorts. Thomas also said next summer, at the junction where state Route 209 and state Route 210 join, UDOT will add an auxiliary lane to improve traffic flow.

The canyon, which is at high risk for avalanches, is closed periodically to mitigate the risk, something that Thomas acknowledged is an inconvenience to the public. He said UDOT is also exploring alternatives to address avalanches while maintaining safety and efficiency for the public.

An open house is scheduled for Tuesday from 4 p.m. to 8 p.m., where the public is encouraged to review the two studies and discuss possible solutions to the issue. The open house, to be held at Cottonwood Heights City Hall, is an important part of this process, according to Dean and Thomas, who both said they invite public discourse and comments. 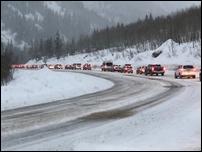 If you’ve driven up Little or Big Cottonwood canyons to ski or snowboard this winter, you’ve probably noticed a surge in traffic.

"We want the public and ourselves to be educated through the study process," Dean said.

"We want to get everybody's input, we want to combine that with technical information and develop some alternatives this summer and by this time next year hopefully have an idea of where we're headed with those alternatives," Thomas said.

The official scoping period for the Environmental Impact Study runs through May 3 and official public comments can be made at the open house, by emailing littlecottonwoodeis@utah.gov or online at UDOT's website. Public scoping for the transportation study will continue later in the year.