SALT LAKE CITY — Nearly a year after reality star and real estate mogul Donald Trump became the leader of the free world, the federal government informed 21 states that their election systems had been targeted by hackers during the 2016 election.

Utah was not one of them, perhaps in part because of its low profile and consistent, conservative voting patterns. The Beehive State flew under the radar.

Utah not among states targeted by hackers, Lt. Gov says

Utah's top elections officer says the state was not one of 21 where hackers targeted elections systems last year.

That changed, however, when former presidential candidate Mitt Romney ran for senator in the Utah primary elections in June.

During the 2018 primary elections, that number reached 1 billion — 2,000 times what it was the year before.

While correlation does not equal causation, Lt. Gov. Spencer Cox and his elections team believe Romney’s campaign had something to do with the enormous increase.

Mitt Romney was declared the winner over Mike Kennedy by The Associated Press shortly after polls closed Tuesday in the race to become the Republican nominee for the U.S. Senate seat held by retiring Sen. Orrin Hatch.

“My team and I sat down the day that Mitt Romney announced he was running. … We realized that this was different, that this was a game changer because you had a former presidential candidate who was very outspoken when it came directly to Russia,” Cox said during an interview on Utah Policy’s podcast.

Twelve Russians were accused Friday of hacking into the Clinton presidential campaign and Democratic Party after a months-long investigation into Russian attempts to meddle in the 2016 U.S. election. Romney’s hawkish stance against Russia and his relationship with President Trump pushed Utah’s elections into the public eye and prompted a surge of nefarious activity, Cox said.

However, though both Cox and Utah’s elections director Justin Lee called these scans or intrusions “hacking attempts,” Bates wants to make it clear that’s not exactly what they are.

When someone attempts to hack, they’re trying to enter the system. While the state’s IT team may be blocking some hacking attempts, they’re mainly blocking reconnaissance and surveillance traffic, Bates said.

Moscow now accused of US election meddling, in indictment

Twelve Russian military intelligence officers hacked into the Clinton presidential campaign and Democratic Party, releasing tens of thousands of stolen and politically damaging communications, in a sweeping conspiracy by the Kremlin to meddle in the 2016 U.S. election, according to a grand jury indictment announced days before President Donald Trump's summit with Russian President Vladimir Putin.

That kind of traffic can come from bad actors doing automated scans while attempting to find vulnerabilities or weaknesses in a system but isn’t a constant onslaught of hacking attempts, said Richard Hickman, manager of the computer forensics and incident response department for business consulting firm Eide Bailly.

“Most of the time, they're looking for some sort of a vulnerability, a hole in the fence or something like that,” Hickman said.

The state’s IT team also occasionally blocks traffic from locations like Russia, China and Iran as a precaution, though hackers are often adept at concealing their true location, said Utah Department of Technology public information officer Stephanie Weteling.

While the team blocks about 80 percent of the total traffic attempting to access Utah’s online systems, Hickman isn’t entirely surprised at the number of intrusion attempts the state faces — even at its new rate of 1 billion per day.

Cybersecurity is always going to be something that companies should have on the forefront of their mind. You shouldn't be sweeping anything under the rug.

Programs that allow hackers and security professionals alike to scan and search for vulnerabilities have been available to anyone who wants them for a while now. And while Utah hasn’t suffered any successful hacking attempt, the state knows it’s time to secure the processes.

“Whether (the intrusion attempts) affect anything or change anything is one thing, but then there’s sort of just eroding the trust in the democratic process,” state elections director Lee said. “That’s what we’re concerned about. We want to make sure the vote is secure, but we also want to make sure the public’s trust is secure in what we do.”

Lee says voting machines aren’t connected to the internet, however, a group at Salt Lake’s HackWest cybersecurity conference in March was able to find a vulnerability that allowed someone in a voting booth to access the system setup of a voting machine. 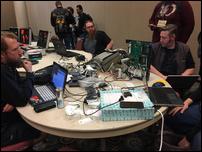 Huddled in the corner of a small room in the Salt Palace Convention Center are a group of hackers looking for vulnerabilities in 12 voting machines. And they've found a pretty major one.

“It just creates doubt in the integrity of the system, and if that doubt is there, you could (hack a voting machine) in a district you may not be in favor of, and those votes get thrown out,” HackWest volunteer Jake Blaney said.

Utah knows the state will need more cyber protection than it has had in the past and recently called in some federal help.

“We had to be prepared for this one very early on, so we contacted Homeland Security very, very early in this process many months ago and we've been working with them,” Cox said during the Utah Policy podcast. “We're (also) able to get some additional funding from the Legislature to do that.“

Utah submitted a request for about $4.1 million in response to an appropriation awarded to the Helping America Vote Act. The funding will help Utah protect its election systems and upgrade election equipment.

“Cybersecurity is always going to be something that companies should have on the forefront of their mind,” Hickman said. “You shouldn't be sweeping anything under the rug.”