'It's beyond my wildest dreams:' On his last day, KSL's Doug Wright reflects on a storied career

SALT LAKE CITY — While out on an assignment to cover the rebuilding of the “Spaghetti Bowl” junction on I-15, Doug Wright had to improvise.

Back at the KSL Newsradio station in downtown Salt Lake City, the entire building had been evacuated because of a bomb threat. There was nobody left in the studio — no producers, no hosts, no reporters.

But a producer did leave Wright’s mic live on the broadcast. And Wright, sitting in a trailer at a remote construction site, went to work to fill the airtime.

“I just sat there with a hot mic,” Wright said. “It seemed like an eternity of course, but I think it was like 25 or 30 minutes, just filling airtime. It was almost like filibustering on Capitol Hill.”

Over the past four decades, Wright has kept the conversation going about countless political issues and topics.

Friday, as he celebrates his 40th anniversary with KSL Newsradio, he is spending his last day hosting "The Doug Wright Show." However, he will continue the "KSL Movie Show" on Friday mornings and will remain an on-call correspondent for the station.

It's a bittersweet day here @kslnewsradio. We're saying "Farewell for now" to @DougWrightShow after 40yrs on the air, huge milestone. In the studio @joncaramanica sings a beauty to Doug. #donutfuneral Raise your donut & cheers to Mr. Wright! pic.twitter.com/s3VQhCW9V3

Here it comes! @DougWrightShow says "good-bye". 40yrs of Broadcast Excellence. By his side is his wife, D. @kslnewsradiopic.twitter.com/dqrrpwhATh

They come out of the woodwork when @DougWrightShow retires. Hey,@MittRomney#DonutFuneral#donutsforDoug#WeLoveDougpic.twitter.com/PvLvI79klN

I don’t always eat donuts, but when I do it’s in honor of Doug Wright. Doug, it’s been great working with you these last few years. Congrats on your semi-retirement; you and the @DougWrightShow will be missed! #donutfuneral#utpol@JeremyMausspic.twitter.com/FzLNIFhsLd

Listen to Wright's last sign off from Friday morning here:

Wright was born and raised in the Sugar House neighborhood of Salt Lake City. He started in broadcast radio at age 16 in Tooele. He worked part-time jobs at two other stations and a grocery store before moving to KSL several years later. He became a full-time talk show host in 1985.

He’s stepping down during a political era that feels different than during the majority of his career, he said. As he moves from a role at the forefront of major political discussions to someone who will mostly be observing, Wright said he is noticing some major changes in politics.

In the turbulent political times of the past, it was easier to gloss over scandals or rough events, Wright said. This time, though, he said it feels like there is some real damage being done.

And Wright said it’s not just due to President Donald Trump, though he seems to be at the epicenter of the changes. It’s the whole political landscape. It’s the way people talk to each other that filters down, he said.

“Politics is meant to be a little rough and tumble,” Wright said. “The pendulum will swing. I have every confidence that the nation’s ultimately going to be just fine. … But this is the one that honestly troubles me the most.” 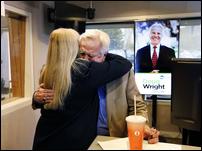 After nearly 40 years at KSL Newsradio, talk show host Doug Wright has announced his semiretirement and will no longer host a daily show starting June 1.

There have been rocky times in interviews Wright has conducted, too, he said.

In one such case, he invited a member of the Flat Earth Society in for an interview. He was curious to see how someone could believe the Earth is flat, he said.

The interview started off well, but then the man got "nuttier and nuttier," and eventually insulted The Church of Jesus Christ of Latter-day Saints, Wright said. He had enough at that point, and Wright cut the interview short.

If you’re not getting butterflies in your stomach from time to time before interviews, though, you’re doing something wrong, Wright said.

Though Wright doesn’t always keep his opinions hidden from listeners, his main goal is to tell people the truth and the whole story, he said.

“I try to be fair and I try to give everybody a fair shake,” he said. “My main purpose I’ve always believed is to facilitate the conversation and do that fairly.”

Two of his favorite interviews over the years were with political figures.

One was a conversation with William Shirer, a journalist who was stationed in Berlin during World War II. Shirer later wrote a well-known book documenting the history of Nazi Germany, “The Rise and Fall of the Third Reich.”

“I was so intimidated,” Wright said. “To talk to him again was one of those moments where I can’t believe I’m talking to this guy.”

Another memorable conversation was with Robert McNamara, who was Secretary of Defense under John F. Kennedy. McNamara was heavily involved with orchestrating the United States’ involvement in the Vietnam War.

“I couldn’t believe I was talking to somebody hand selected by President Kennedy,” Wright said.

Talking with a man who was so involved with the Vietnam War — an event that shaped Wright’s generation in so many ways — was a great experience, he said. During the interview, McNamara said the wounds were still healing from Vietnam, and he called it one of the biggest mistakes the country had ever made, according to Wright.

Traveling on the campaign trail with Mitt Romney when he ran for president in 2012 was also a career highlight for Wright. The political conventions, especially the 1996 Democratic Convention in Chicago, were also fun experiences, he said.

Seeing people at the station rally and come together to cover the 9/11 terrorist attacks was a proud moment for Wright. Being part of the Salt Lake City media market and community is often underrated and is sometimes taken for granted by people who live here, he said.

“It’s amazing the quality of what we have here,” he said. “I think sometimes the people who live here don’t realize just how excellent this market is.”

Plans for the future

After semi-retiring, Wright will still be a part of that market with his ongoing "KSL Movie Show." He’ll also continue being involved in the community of Eureka, where he owns a home with his wife, D Wright.

Wright said he wants to spend more time traveling with D and spending time with his three children. He’ll also be focused on his many hobbies, which include reading, coin collecting, historic document collecting and other interests, he said.

“As long as I can stay disciplined, I’ve got lots to do,” he said.

Wright has told the story many times of when he was in high school, he and many of his friends loved listening to the radio. He once said if he could be on the radio just once, how cool that would be.

Now, more than 50 years later, he’s looking back on an incredible radio career.