JEREMY RANCH, Summit County — A group of residents who oppose a new sound wall between I-80 and their homes now accuse the Utah Department of Transportation of not allowing them to vote about the proposed project and will petition Gov. Gary Herbert about the process.

Members of Citizens Against The Wall, which has opposed the sound barrier since it was first proposed, said residents of the Jeremy Pointe neighborhood were denied the right to vote on whether or not the project should be approved despite residing closer to the wall than the owners of the 27 properties who did vote.

“It is disappointing enough that UDOT has ignored the concerns of the majority of the residents in the area, but it is a violation of state law to deny eligible voters their right to vote. Not only has UDOT committed this egregious violation, but they did so in an arbitrary and capricious manner,” Tom Farkas, a founding member of the group, said in a statement.

Construction of the 17-foot-high, 3,200-foot-long sound wall is set to begin within the next month, according to UDOT spokesman John Gleason. It is being added as part of a project to add a lane for slow-moving trucks.

The group argues UDOT’s policy states those directly adjacent or bordering a proposed sound wall can vote for or against a project. Farkas told KSL in April that the group believes the wall will negatively impact scenic views of those living in the area and in Summit County. 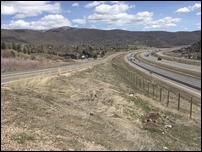 A citizens group in Jeremy Ranch is making a lot of noise about a sound wall proposed for their neighborhood along I-80.

“UDOT should abide by its own rules given the other residents who voted were required to do so,” added Dan Bass, president of the Jeremy Pointe Homeowners Association and a Citizens Against The Wall member, in a statement. “We have suggested alternative, more effective methods of noise mitigation to UDOT, but they are proceeding with the project, taking down wildlife fencing, and have given no indication that any other noise measures will be used.”

Gleason said UDOT asked residents most-likely affected by freeway noise, not proximity, when it asked residents to vote for a sound wall project. Twenty-seven of the 29 people who were polled voted in favor of the project, which is why the agency planned to move forward with the project, he added.

“If the property owners had decided that they did not want the wall, then we would have moved on and not built the wall,” Gleason said. “An overwhelming majority of people that would be negatively affected by the increased traffic noise said that they did indeed want the noise wall to be built, so we really do have to respect what they’re saying and what our experts are saying.”

UDOT is adding a berm and surrounding landscaping in addition to the wall.

“We’re going to work closely with the community there to make sure it does look nice,” Gleason said.