Utah’s tech industry is No. 1 fastest-growing, but there are ‘rain clouds ahead’

SALT LAKE CITY — In an era of unprecedented technological innovation, there is no shortage of growing tech hubs being touted as the “next Silicon Valley.” Joining the ranks are Silicon Hills, Silicon Prairie, Silicon Beltway, Silicon Beach, Silicon Roundabout and (a personal favorite) Sili-corn Valley (that’s Iowa).

So what makes Utah’s Silicon Slopes different from the rest of the Silicon geography?

For starters, Utah’s tech industry grew faster last year than any other state in the nation with a 3.6 percent increase in tech industry jobs from 2016 to 2017, according to a new report from the Computing Technology Industry Association.

Though down a little from the 5 percent increase from 2015 to 2016, Utah’s tech jobs growth is still at the top, followed closely by Michigan, North Carolina, Washington and Idaho in the top five.

The Beehive State is also 10th in the nation for states with the highest concentration of tech workers relative to their overall employment base — meaning 8.6 percent of all workers in the state of Utah work in the tech industry.

“This is just further evidence that Utah is on the map,” said John Knotwell, president and CEO of the Utah Technology Council. “We are a thriving tech hub, and we think of this as more of an innovation marketplace than just tech.”

But it’s not all sunshine and rainbows.

“There are obviously rain clouds ahead in the forecast that we need to prepare for,” said Silicon Slopes executive director Clint Betts, though he believes the overall outlook is positive.

Leaders in the tech community seem to be concerned about three, main “gaps” that could threaten sustained tech growth in Utah — and they all seem to be intrinsically linked to one another.

The entrepreneurial DNA of Utah and the rise of Silicon Slopes

Utah continues to surprise outsiders with the level of innovation coming from the state. National media outlets and business leaders have recently taken notice of Utah’s burgeoning tech community, many aptly naming it Silicon Slopes.

Utah was ranked first in overall and private sector job growth for the month of March with a growth rate of 3.1 percent, according to the Utah Department of Workforce Services. Betts believes Utah owes that distinction to the tech sector.

But the combination of a rapid job growth rate and a low unemployment rate creates a different kind of problem: unfilled jobs. According to Knotwell, there are about 4,000 unfilled tech jobs in Utah.

And the tech sector isn’t the only industry facing a lack of skilled workers, nor is Utah the only state to experience this gap.

“The number of new jobs that need to be filled are outpacing the number of new people universities are producing with those skills,” said Aaron Skonnard, CEO of Pluralsight, a local tech education company.

Even more difficult is keeping highly-educated tech workers in Utah. To incentivize students to stay, a $2.5 million program passed by the Utah Senate is offering debt relief to local college grads who choose to employ their STEM skills in-state.

5 techy things in the Utah Legislature

From self-driving cars to drones, here are five tech-centric bills on Capitol Hill.

But though Utah brings in about as many tech employees as it sends out, the workers that leave have higher degrees than those that come in, according to a new report on computer coding employment from the Utah Department of Workforce Services.

Many believe this may have to do with a second gap in the tech cosmos.

“Salt Lake/Provo wages are generally below competitor cities," the report states. "While it may cost more to live in Seattle or San Francisco, the wages more than compensate when compared to Salt Lake/Provo.”

The tech salary gap can add a level of difficulty for recruiters in Utah who are already dealing with what Qualtrics CEO Ryan Smith calls a “branding problem.”

“You give people an option to work in Dallas, Seattle or Utah — they’re not choosing Utah first. That’s a branding problem,” he said.

The Silicon Slopes effect has generated unforeseen consequences for Utah. One has been the tech boom’s gradual rebranding of the state’s image.

Though it may be difficult to persuade workers to come to Utah, it can be even harder to get them to leave, said Pluralsight’s head of talent acquisition Brandon Welch. A lot of people are attracted by the quality of life, the recreational opportunities and the cost of living and doing business in the Beehive State.

For Pluralsight, prospective employees are especially attracted to the product the company is creating and the vision behind it.

“What I’ve seen over the years in recruiting is that money and salaries, while they’re important, they’re just one aspect of what most candidates are looking for, especially in the technology industry,” Welch said. “Software engineers, developers, coders, they are really looking to be a part of something that is meaningful.”

And Pluralsight hopes meaningful efforts will be what helps close the third, and most significant, gap plaguing the Utah tech industry.

“Fundamentally, the issue is grounded in the fact that the technology landscape and the demand to learn new things is moving faster than our ability to learn them,” Skonnard said.

The moniker Silicon Slopes has become the catchphrase used to depict Utah’s booming tech scene. However, while Silicon Valley and Silicon Slopes have similarities, Utah’s “slopes” are still strikingly different from “the valley."

Skonnard, Betts, Knotwell and other state tech leaders believe the answer lies in early education. If children have more opportunities to engage in STEM learning early on, they believe that interest and skill will carry over to higher education and, eventually, the workforce.

“The success is not democratized nor will it be democratized here in the state of Utah. The success of these companies is only going to trickle down to a few people,” Betts said. “As a tech community, we need to figure out how we at least extend opportunity to everybody and democratize opportunity.”

He and other leaders in the tech community believe the first step in doing so is making computer science available in all schools so interested students have an opportunity to learn. While about 10 percent of elementary schools have a STEM focus, according to Knotwell, Betts believes there needs to be a much bigger push — especially in rural areas. 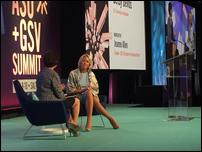 Secretary of Education Betsy DeVos drew controversy for her appearance while leaders from around the globe discussed the tech education gap at the eighth annual ASU+GSV summit hosted in Salt Lake City.

Both Silicon Slopes and the state government have created initiatives to accomplish this goal, and tech education company Pluralsight has been leading the charge with an initiative of its own.

“We’re working on building the infrastructure that’s needed to connect industry with education, so industry can articulate what skills are needed as those change and education can chart learning pathways,” said head of social impact at Pluralsight Lindsey Kneuven.

Kneuven hopes the company’s efforts will help education and the tech industry align so that when kids are ready to enter the workforce, they’re equipped with skills that are useful and up-to-date.

“We have an entrepreneurial spirit,” he said. “We’ve always had that, had a passion and willingness to try new things and work hard at it.”