The trip comes less than a week after several historic announcements were made during the church’s annual general conference. 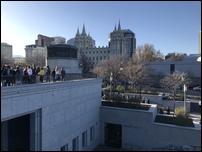 LDS Church leaders announced home teaching and visiting teaching programs will be retired. Plus, seven new temples — including one in Layton, Utah — are planned.

KSL TV will accompany President Nelson on his tour and will report back intermittently during the trip, beginning Thursday.

The church will broadcast a meeting in London to the United Kingdom’s nearly 186,000 members and Ireland’s 4,000 members. The first missionaries were sent to the U.K. in 1837, and the church boasts nearly 512,000 members in Europe now, according to an LDS Church news release.

President Nelson, Elder Holland and their wives will visit the Holy Land where the church has its Brigham Young University Jerusalem Center and 260 members who make up four congregations. The group is also scheduled to visit several of Jerusalem’s historical sites.

The church is growing quickly in Africa, with about 540,000 members so far. President Nelson will visit Kenya, where the first members were baptized in 1979. There are now more than 13,000 members in Kenya.

A meeting will be broadcast to all congregations throughout the country.

A meeting in Zimbabwe will be broadcast to the nearly 30,000 Latter-day Saints and missionaries who call the country home. The first missionaries entered what was then Southern Rhodesia in the early 1930s, according to the LDS Church news release.

President Nelson designated Bengaluru, India, as a site for one of the seven new temples revealed during the church’s general conference. It will be India’s first LDS temple.

"We want to bring temples closer to the expanding membership of the church," President Nelson said during his general conference announcement. "My dear brothers and sisters, construction of these temples may not change your life, but your time in the temple surely will."

India is the second-most populous country in the world after China with over 1.2 billion inhabitants, according to the Central Intelligence Agency. There are more than 13,000 LDS members and more than 40 congregations in the Asian country, LDS Church officials said.

The group will meet with LDS faithful in Thailand where more than 21,000 members reside. Worship services in the country were authorized in 1961, and the country was opened for missionary work in 1966 by former church President Gordon B. Hinckley.

President and Sister Nelson, and Elder and Sister Holland will meet with Latter-day Saints in Hong Kong, where there are now nearly 25,000 members attending 41 congregations. Missionary headquarters were established in Hong Kong in 1949, and the first temple was completed in 1996.

President Nelson’s ministry tour will end in Hawaii with a meeting on the Brigham Young University - Hawaii campus in Laie. There are 74,000 Mormons in Hawaii, and two temples in Laie and Kona.