SANDY — It's been five years since Ralph Salazar, 59, and his girlfriend, Alice Griego, 55, were shot and killed inside their home on Salt Lake County's east bench and then set on fire.

But there has still never been an arrest or even a person of interest named or a possible motive announced in the investigation, much to the frustration of the family.

On Thursday, the fifth anniversary of the couple's death, family members held a candlelight vigil in front of the house Salazar and Griego were killed in to remind the public that their deaths remain unsolved, and that any information, no matter how small, is needed to solve the crimes.

"It's amazing that a double homicide can take place with modern technology like DNA (tests) and what not, and there's no suspects," said Jason Jensen, a private investigator hired by the Griego family.

On Dec. 14, 2012, the bodies of Salazar and Griego were found in the master bedroom of Salazar's Salt Lake County house, 2811 E. Ksel Drive (9420 South). An autopsy determined both were shot to death. Their bodies were found on a bed that was set on fire, according to investigators.

At the time, Salt Lake County Sheriff Jim Winder said his investigators had collected a "significant amount of evidence" and that the suspect "made some mistakes."

But five years later, although police say the case is still "active," the investigation has been turned over to detectives in the Unified Police Department's Cold Case Unit, something that has frustrated the family. 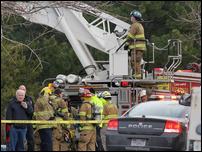 Police are still looking for the suspects in the murder of a Sandy couple who were found dead inside their home last month.

Because of that, Griego said she and her family were going to start taking matters more into their own hands. Jensen was hired by the family about a week ago. And Griego said she planned on holding more events to keep her mother's story alive in the public eye rather than remaining quiet as she said police had originally asked so as not to compromise the investigation.

"I ask the same question every time we call and it's always the same answer. So I feel like I have no hope with the Unified Police Department. That's why I decided to go my own route," she said. "No more keeping it hidden."

Salazar, or "Uncle Ralph" as he was known to his family, moved to Utah from New Mexico when he was a teenager. He started working in siding and worked his way up from the bottom to become the owner of RS Aluminum.

Griego moved to Utah from Colorado and got a job at Smith's Food and Drug in 1996. For more than 15 years, she worked in the store bakery.

We're not going to stop. We're never going to give up. We're going to continue to search for the person or persons who did this to my family.

Salazar was known as a very generous, hard-working man. The last time he was seen alive was on Dec 13, 2012, about 10:30 p.m. when he dropped off a friend at home after going to a local bar.

Investigators did not find anything missing from Salazar's home and do not believe it was burglarized. From the start, family members have believed the deaths were not random.

"From the sounds of it, it sounds like they were targeted specifically, but we don't know why. We don't know a motive yet," Jensen said.

Jensen said he is still in the initial stages of his own investigation and did not have any additional information that hadn't already been released over the past five years. But he, too, said the goal now was to collect new tips from the public, even if it's a rumor that they can verify or disprove.

"We're not going to stop. We're never going to give up. We're going to continue to search for the person or persons who did this to my family," Jenna Griego said.