ATLANTA, Georgia (CNN) — The amount of time young children in the United States spend with mobile screens might raise some eyebrows, as a new report found it has tripled in just four years.

Children age 8 and younger spent about 15 minutes a day staring at a mobile screen in 2013 and now they spend 48 minutes a day, according to the report by Common Sense Media, a nonprofit organization focused on helping children, parents, and educators navigate the world of media and technology.

The report, released Thursday, also found that 42 percent of children 8 and younger now have their own tablet devices, a steep increase from 7 percent four years ago and less than 1 percent in 2011.

Children spending more time on mobile devices comes as no shock to Douglas Gentile, a psychology professor at Iowa State University who was not involved in the new report but has studied the effects of media use on children.

"On the one hand it's not surprising because it's what we look around ourselves and can see. I can see it at the airport, for example, I can see it at restaurants and I can even see it in my own home where my younger daughter watches almost no television but she'll watch lots of TV shows on her phone," Gentile said.

On the other hand, "it's been getting harder for parents to really monitor a lot of what their kids are seeing and doing. At the same time, they're relying on the seeming benefit of being able to quiet the kid at a restaurant with a device," he said. "We may be building a bit of a Frankenstein's monster, because we're using that power for our benefit, not for the child's benefit."

We may be building a bit of a Frankenstein's monster, because we're using that power for our benefit, not for the child's benefit.

These changing patterns in how children interact with media appear to be a "seismic shift," said James Steyer, chief executive officer and founder of Common Sense Media, in an email to CNN.

"One of the most staggering findings is that mobile devices are now as common in the home as TVs — 98 percent of households with kids under 8 have a mobile device," he said. "The ubiquity of mobile is changing childhood."

For the new report, 1,454 parents of children 8 and younger were surveyed online in January and February about how their children use media. The new survey built off of two previous surveys on children's media use that were conducted in 2011 and 2013.

The new findings, detailed in a report, showed that children 8 and younger spend an average of 2 hours and 19 minutes a day with screen media, roughly the same as in prior years.

"The report actually shows that kids' overall media use has stayed about the same since our 2011 report (2:19 versus 2:16). What's changed is how they're using it," Steyer said in the email. "Mobile is totally taking over — it now makes up 35 percent of screen time, compared to 4 percent in 2011."

The report also found that children 8 and younger now spend more time on mobile screens — around 48 minutes a day — than they do reading or being read to, which on average is about 30 minutes a day.

Almost all children 8 and younger, 98 percent, live in a home with some type of mobile device and the same percentage have a TV in the home, according to the report.

Nearly half of children 8 and younger, 49 percent, watch TV or play video games in the hour before bedtime and 42 percent of parents say the TV is on "always" or "most of the time" in the home, according to the report. 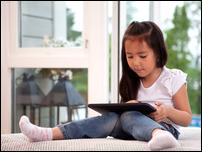 How to help kids balance life and electronic devices

He wanted “gaba gaba on pad,” which roughly translates as, “I really want to watch ‘Yo Gabba Gabba’ on your iPad, Mom. I and want to do it now!”

The report also showed differences in media use by household income and parental education.

That's a difference of 1 hour and 39 minutes each day.

Those differences in screen time were "quite dramatic," said Steve Gortmaker, a professor of health sociology at Harvard University who was not involved in the new report.

"Lower-income children were spending more than twice as much time with these devices, and again these are just children, 2 to 8 years old," Gortmaker said.

"About the time that children are teenagers they're spending over, let's say, 6 hours engaged with these screen devices," he said. "You see rapid increases, and a growing kind of inequality in terms of who's spending their time with these devices, and it's worrisome in just a lot of ways."

Yet when it comes to households owning a mobile device, a gap by income has virtually disappeared, the report showed.

Overall, 67 percent of parents whose children use screen media say it helps their children's learning, according to the report.

However, infants and young toddlers tend not to yet have the symbolic thinking or memory skills to understand two-dimensional screens until they are around 15 to 18 months old, said Dr. Jenny Radesky, an assistant professor of developmental behavioral pediatrics at the University of Michigan C.S. Mott Children's Hospital, who wrote a commentary in the new report.

Radesky was also lead author of the American Academy of Pediatrics' recommendations for media use released last year.

"Our new AAP guidelines wanted families to be aware that under that age, despite what TV, video or app marketers have to say, babies don't learn anything from screen media. It's fine to Skype, but infants or toddlers probably won't be able to interact well over it until 15 months on average. And fine to look at pictures or videos together," Radesky said.

The iPad baby: How young is too young to expose your kids to media devices?

In today’s tech-savvy world, many babies learn how to operate an iPad around the same time they figure out how to crawl.

"I tell parents not to stress if they want to watch a sports game now and then with their baby, or they need to put their older infant in front of PBS for 20 minutes while they do the dishes. But keep it short, understand the realities that media is not educational at this age, and avoid a lot of background TV when no one's watching. We talk to our kids less when it's on," she said.

A growing trend among parents is to give young children their own hand-me-down smartphone or tablet, which may only connect to wifi for games, apps and educational purposes, Radesky said.

"I generally recommend that families not give their young kids total control of these devices. In other words, keep them up high where kids have to ask permission to use them, don't store or charge them in the child's room, and have rules about where and when they can be used," she added.

"Take off all the inappropriate apps and try to teach the child to use it for creative purposes, like as a camera or video recorder, and to share their creations with family members so that they learn that device use isn't always a solo activity," she said.

"So that kids know it's not okay to ignore other people when they are looking at a screen ... and how to reduce distractions when we need special family time," she said.

'Mobile will only become a bigger part of kids' lives'

The first iPhone hit the market a decade ago, and no one could have predicted how widespread and all-consuming mobile technology would become in the lives of children, said Common Sense Media's Steyer in his email.

"Though I can't say what the next 10 years will bring, in this report we look at some up-and-coming tech impacting kids' lives, like augmented and virtual reality, 'assistants' like Alexa and Echo, and connected 'smart' toys," Steyer wrote. "Mobile will only become a bigger part of kids' lives."

While it's difficult to guess what children's media use in the future could look like, Iowa State University's Gentile said that he has some ideas.

"One thing that's not hard to guess is that it will become more private as we make media more and more just a thing you carry with you," he said. "More and more of our media consumption is on something that is hand-held or back in a child's bedroom where parents are less able to monitor it and set consistent rules."

In a study that published in the journal Developmental Psychology last month, 3rd through 5th graders (ages 8-11) who had their own TV or video games in their bedrooms spent more time with media. More time spent was associated with a reduced amount of sleep and reading, and that has been tied to lower grades in school.

In addition, those with bedroom media were likely to be exposed to more media violence and tended to act more aggressively than children with no bedroom media, said Gentile, who was a co-author of that study, which involved more than 4,000 students in the US and Singapore.

Finding a healthy balance of media use for children has long puzzled researchers and parents alike, Gentile said.

"As a society, we haven't really figured out where that is with children and media because children's media screen time generally just keeps going up and up every time we measure it," he said. "And there's not going to be a one-size-fits-all answer."