SALT LAKE CITY — After months of uncertainty, it was announced during a tense Shelter The Homeless board meeting Thursday where specific homeless populations will be assigned for three new homeless resource centers.

Janell Fluckiger, Shelter the Homeless executive director, listed the locations when reviewing the status of each of the site's purchase contracts.

In the same meeting, Gail Miller and developer Josh Romney were named to the board of the group that will oversee the centers.

But before those decisions were made, Salt Lake City Mayor Jackie Biskupski began the meeting by expressing concerns about transparency with regard to the city's selection of an architect to design its two shelters and why the Shelter the Homeless board hadn't yet approved the $200,000 to fund the contract.

"We're getting some pushback," Biskupski said. "We need to better understand, one, why the city isn't being included in discussions around the architect that we agreed to hire ... and now we're being told we can't."

It's an issue that board members attributed to the difficulty of bringing in the nonprofit board, which has previously only acted as property owner to The Road Home, to coordinate the homeless model shift.

Fluckiger said the architect matter was "on hold" until it could be discussed alongside better budget projections to ensure "we're being fiscally responsible before we enter into any contracts."

"Well, it's a contract we (Salt Lake City) have entered into," Biskupski said. "And that funding should be coming to us to pay for that."

The conversation carried on for several minutes — with Biskupski saying she wants the process to allow community engagement on shelter design — until Lt. Gov. Spencer Cox told Biskupski, "Mayor, I don't think anybody is challenging you right now."

"Look, I get it," Cox said. "We've heard it. We understand you have some concerns. This is a new organization. We're all trying to work through this ... You've said your peace. I think we're good."

"I don't think we are good, and that's my concern," Biskupski said.

"I understand that," Cox said. "You've made it very clear to all of us you're not good with the process."

After the meeting, Biskupski said conversations are still needed to sort out her concerns, "but they will occur."

Salt Lake County Mayor Ben McAdams said he wasn't aware of any "tensions" between Biskupski and the board, so he was "suprised at the outburst." Nonetheless, he said the board can work to "move this forward." 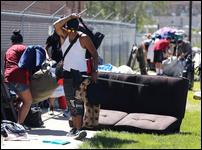 A routine cleanup of a cluster of Salt Lake City blocks near a homeless shelter is sending those who were staying on the street in search of a new camp.

When asked about the site population decisions, McAdams said Shelter the Homeless board members and city and county leaders chose the sites based on the size of the different populations and the size limitations of the three facilities.

While Salt Lake City's two shelters have been capped at 200 beds, South Salt Lake is expected to house up to 300.

"What we know from our numbers is we need about 200 and some odd beds for women and the largest population is men," McAdams said.

Fluckiger said the 700 South site was selected for women because the site was considered more "contained" and "secure," and because of its proximity to services.

The plan to break up the downtown Road Home's 1,100-person population into different populations and scatter them in smaller, resource-focused facilities is part of Salt Lake County's effort to redesign its homeless resource delivery system.

Fluckiger said the decision "naturally came" out of discussions with city, county and state leaders based on demographic numbers. Gender, she said, isn't necessarily a "deciding factor" on what populations are high- or low-risk.

According to the mayor, the statement read, "the city has been repeatedly told that none of the homeless resource centers are for the chronic homeless, and that the men's center will be for working men in transition, who need short-term assistance and minimal health care."

City leaders say they still need much more information to respond accordingly. According to Mayor Wood, the City has been repeatedly told that none of the homeless resource centers are for the chronic homeless, and that the men's center will be for working men in transition, who need short-term assistance and minimal healthcare.