SALT LAKE CITY — The Utah Medical Association is making a public stand against the term "medical marijuana," calling it deceptive as it pertains to debates about the legality of the whole plant.

State lawmakers, however, have more ambiguous feelings about the phrase.

There is not yet enough research to argue in good faith for legalization of the whole marijuana plant on the basis of its medical benefits, Utah Medical Association CEO Michelle McOmber told KSL on Wednesday.

"We are not opposed to cannabis-based medicine, we are just saying the whole plant is not medicine. ... When you call something by that name, that's the assumption that the general public makes," McOmber said.

McOmber said a substantial amount of additional research is required before the whole marijuana plant can be referred to as medicinally beneficial. In fact, she added, the U.S. Food and Drug Administration "has not approved any whole plant as medicine, at all, ever."

"The one thing about the whole ... you don't have a (proper) dose," she said. "You can't say to a patient, here's your seeds go plant it and then treat yourself."

McOmber argued that the term "medical marijuana" is deceptive because of the way it frames the issues of legalization and access to fence-sitters who otherwise know little about the topic. That person "would (assume) that it is approved by the medical community, that (doctors) would know what to prescribe," she said.

The Utah Medical Association, founded in 1895, is a professional networking organization that also participates in policy advocacy at the state level. The association's website describes itself as "the state's foremost advocacy arm for the profession, protecting and enhancing the environment in which medicine is practiced in Utah."

The organization is weighing in on the marijuana topic shortly before the start of the Utah Legislature's general session Monday. Two bills were introduced in the Utah Senate last year, proposing increased access to marijuana for people with certain medical conditions, but the measures ultimately faltered before the end of the session.

We are not opposed to cannabis-based medicine, we are just saying the whole plant is not medicine.

State Sen. Todd Weiler, R-Woods Cross, last year voted in favor of S.B. 73 after it was amended to not include the whole marijuana plant for medicinal purposes. While he doesn't find the phrase "medical marijuana" troubling, he said he can understand the Utah Medica Association's point of view.

"I do think that the UMA is kind of underscoring the point that there is no reliable underlying scientific data, at least in the United States," supporting the medicinal value of the whole marijuana plant, Weiler told the Deseret News.

But Weiler added that there's precedent to use the phrase "medical marijuana" because of recognition the plant has received elsewhere in the United States.

"I think the term medical marijuana is being used nationwide because it has been legalized for medical use and recreational use in (other states)," he said. 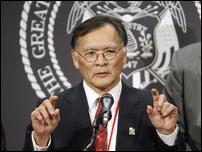 The only "medical marijuana" bill passed by Utah lawmakers in 2016 was a resolution urging the federal government to reclassify cannabis as a Schedule II drug, a change that would open the door to medical research.

Rep. Brad Daw, R-Orem, granted that arguing against the phrase "medical marijuana" is "on the one hand ... nitpicky," but said he understands the pushback. The phrase is a "sloppy term that really connotes very little," he said.

"I think what they're trying to get away from," Daw said, "is the notion that marijuana by itself is medicinal. There may be certain extracts of the plant (that are), but not the plant as a whole."

Sen. Evan Vickers, R-Cedar City drafted last year's senate bill that, after being amended, would allow qualifying patients access to marijuana extract products with low concentrations of THC, the plant's psychoactive ingredient, and high concentrations of CBD, another of the plant's components.

Vickers' bill lost the support of the Utah Medical Association after it was changed to increase its allowances for THC extract products. Vickers on Wednesday told the Deseret News that he believes some limited legislation making marijuana products available to patients can be appropriate, even without a new wave of research about the plant, which he said is heavily restricted by its federal classification.

"I think that there's probably value in trying to move forward incrementally," he said.

But Vickers added that he values the input of the Utah Medical Association on the issue.

"I understand why they would say that," he said of the association's objections.

Vickers plans to push for legislation concerning the regulation of marijuana or marijuana extract in the event that access to either are legalized in Utah. But he said it's unlikely he will get around to pushing for a bill similar to what he introduced last year, largely because of uncertainty about the federal government's new approach to marijuana laws under a new presidency.

Vickers added that the Utah Medical Association's stance carries a lot of weight in reference to marijuana legislation being considered.

"It would be pretty hard to pass something like that without having the UMA's support," he said. "I certainly respect their opinion."

Vickers, Daw and Weiler all agreed strongly with McOmber regarding one issue: The importance of finding a way to better research marijuana. Currently, the federal designation of marijuana as a Schedule I Controlled Substance places substantial restrictions on how it can be researched. But Daw said he and others are working on legislation for the upcoming session to make research into the plant more feasible within Utah.