THE BEARS EARS, San Juan County — Several top federal officials from Washington quietly attended a "Gathering of the Tribes" put on last weekend by Native Americans in southeastern Utah, their presence made known only to a chosen few who were "sworn to secrecy."

It's the clearest signal yet that the Obama administration may be considering the creation of a huge national monument surrounding a place called the Bears Ears.

Administration officials joined Native American tribes who were meeting at the Bears Ears to show solidarity and support for protection of a 1.9 million acre region. It's studded with tens of thousands of archaeological jewels spread across a landscape of stunning red-rock scenery.

"It's for preserving this land as useful for the Native Americans, not for private use, or mining or oil and gas," said Navajo Nation member Phil Atene. "Leave it the way it is."

"It's the most sacred land," said Amos Holliday of the Navajo Nation.

The proposal is charged with controversy and any move by the Obama administration to unilaterally protect the region would likely set off an explosive political reaction. There are still bitter memories in southern Utah of a similar political uproar when President Bill Clinton designated the Grand Staircase-Escalante National Monument in 1996.

"They're stealing our lands from us. I think we've been really good stewards of it," said Brent Johansen who represents a group of ATV enthusiasts called SPEAR, San Juan Public Entry & Access Rights, which stands in opposition to the protection plan.

Among the Obama administration officials who attended the unusual inter-tribal gathering was Jonathan Jarvis, director of the National Park Service. Also in attendance were Steven A. Ellis, deputy director of the Bureau of Land Management, and Arthur "Butch" Blazer, deputy undersecretary of the U.S. Department of Agriculture. 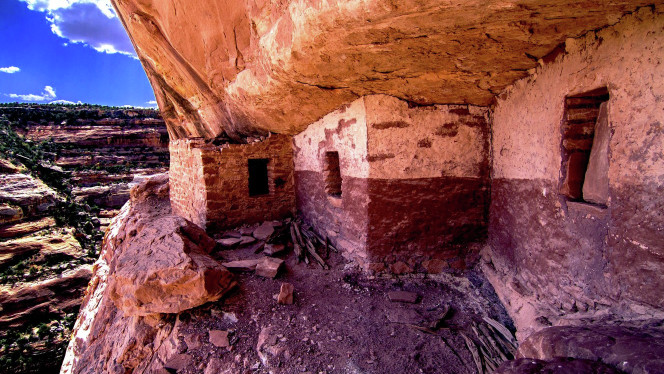 Most of the hundreds of Native Americans who attended the colorful gathering at Bears Ears were unaware of the Washington delegation's presence.

"I was told it would be likely that some D.C. officials would show up," said Josh Ewing, executive director of the Friends of Cedar Mesa, one of a coalition of environmental groups and tribes supporting the protection plan. "I didn't know exactly who they would be, and we were all sworn to secrecy for the 'safety of the visitors.'"

The concern about safety may reflect the strong feelings stirred up by the prospect of Obama taking a hand in the battle.

"People would be upset. They would be unhappy," said San Juan County Commissioner Bruce Adams.

The 1.9 million acre Bears Ears proposal was rejected by the San Juan County Public Lands Council which is comprised of a variety of interest groups. The council did endorse a significantly smaller proposal.

"I think it protects absolutely the most important areas," Adams said.

The Bears Ears visit by the Obama administration officials was revealed days after the event in a news release from the Navajo Nation and in a blog posting by U.S. Assistant Secretary for Indian Affairs Kevin Washburn.

We were struck by the personal stories of spiritual connection to this rugged land. We share the desire of tribal leaders to protect sacred places and leave the earth better than we found it.

"We were struck by the personal stories of spiritual connection to this rugged land," Washburn wrote. "We share the desire of tribal leaders to protect sacred places and leave the earth better than we found it."

The inter-tribal gathering began at Bears Ears with a ceremonial ride by Navajo horsemen. More than a dozen riders ascended a dirt road that climbs to a notch between two prominent bluffs that dominate the landscape. The bluffs are known as the Bears Ears because they can be seen looming over a vast region, as if a bear's ears were poking above the horizon.

The ceremonial ride reminded several of the Navajo riders of a revered war chief who led the Navajos during their tumultuous and ultimately tragic showdown with the federal government when Army troops drove them from their land in the legendary 1864 "Long Walk of the Navajo."

"Chief Manuelito, this was his camp area," said Atene as he dismounted at the Bear Ears gathering. "This was where they gathered herbs, firewood. We (still) get it from here."

"He was a great chief," said Holliday. "And what his clan is, I'm part of that clan. Most of these riders are the same clan as he was."

Much of the debate over protection, though, relates to a much more ancient culture — the Native American cliff-dwellers who occupied the region nearly 1,000 years ago. 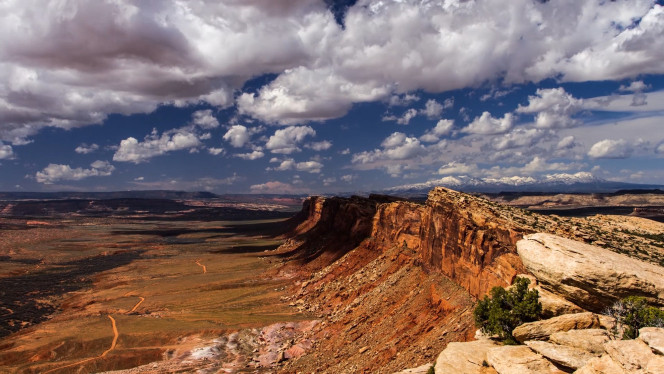 "This is likely an ancestral pueblo handprint from 800, 900 years ago," Ewing said as he inspected several handprints in a natural red-rock alcove. He said experts have estimated that as many as 100,000 archaeological sites lie within the proposed protection zone, including cliff dwellings, granaries, pit houses and fire pits. He argued that the ancient treasures of Grand Gulch and Cedar Mesa are threatened by ATV riders and by potential oil and gas development.

"The goal here is to see this area permanently protected for future generations," Ewing said. "It's a very real possibility that this sacred place to Native Americans could become an industrial zone."

Some opponents claim that the protection plan was cooked up by environmentalists using Native Americans as "puppets."

Ewing disputes the notion that the tribes were recruited for the fight by environmental groups.

What you can/can't do at Utah's national parks

During the summer months, Utahns and tourists alike flock to the national parks and forests that dot the state of Utah. If you are taking a trip to see the famous arches or to backpack through Bryce Canyon, here are a few things you should know.

"They aren't puppets, it's an authentic voice," Ewing said. "Spending any time with Native American people on this landscape will convince you that there's a deep love, passion and respect for this place that is far beyond what I think any white person like me could ever have."

Ewing said the goal is not to ban ATVs entirely. "That should continue in this area. But it needs to be better managed. It needs to be done more respectfully than it is right now."

As a commissioner Adams opposes any broad, new restrictions on oil, gas and mining.

"We're a mineral county. We've survived on the mineral extraction industry in this county," Adams said. He vowed to fight the plan "so that we who live here 365 days a year can survive, not like those who just come to visit and then leave and enjoy the place that they live in."

Members of at least six tribes attended the gathering at Bears Ears, including members of the Navajo, Ute, Pueblo, Zuni and Hopi tribes. In all, 25 tribes have endorsed the plan to protect the Bears Ears area and the homes and graves of many of their ancestors.

It's really significant that there are so many cultures here. You know the old cliche: divided we fall, united we stand. So that's what we're looking at now.

"It's really significant that there are so many cultures here," said Alfred Lomahquahu, vice chairman of the Hopi tribe. "You know the old cliche: divided we fall, united we stand. So that's what we're looking at now."

As he looked across the landscape surrounding Bears Ears, Eric Descheenie, executive adviser to the president of the Navajo Nation said, "Essentially, it's alive, and the rocks have beating hearts, and they breathe, just like you and I do. And a lot of that sounds like folklore, but the way indigenous people interpret our reality is that we do have a personal relationship with these items."

The ancient people who left behind most of the rich archaeological treasures are believed to be direct ancestors of the Pueblo tribe. But the gathering showed that many other tribes also feel a link to the land of the ancients.

"We all migrated through here at one time or another, each tribe," Lomahquahu said. "And we left a footprint here, and we still believe that our ancestors occupy those areas where we left our footprints."