SALT LAKE CITY — As state leaders continue to grapple with Medicaid expansion, Gov. Gary Herbert says they're on track to have a plan in place this summer, but other lawmakers are indicating the possibility of continued delay.

House Majority Leader Jim Dunnigan, R-Taylorsville, a member of the legislative group assembled by the governor to have a plan for Medicaid ready by the end of July, suggested Thursday there's still a chance Utahns may need to keep waiting due to ongoing uncertainty with the federal government.

“Certainly not now is still an option," Dunnigan said following a panel discussion on Medicaid expansion at the Capitol. "But that's not my goal. My goal is to find a solution."

The aim is to have a plan ready for consideration in a special legislative session this year. Dialogue of the plan's obstacles carried an optimistic undertone, even though Dunnigan called the July deadline "ambitious."

"At the very end of the meeting as we were walking out, Secretary Burwell came up to me and said, 'I think we can get this done,'" Dunnigan said. "And so I'm hopeful. It's just got to be the right policy."

Dunnigan said the legislative group has come up with some ideas since Herbert's Healthy Utah Plan was rejected during the 2015 Legislature, but they're not ready to be shared — "yet," he said. 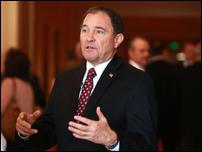 Panelists explored the examples of other states' experiences with higher enrollment and cost than expected, as well as their solutions for paying for Medicaid expansion. Laura Summers, director of state intelligence at Leavitt Partners, said some use a tobacco tax, a hospital tax or a designated fund.

But the question remains whether the state, rather than the federal government, can control enrollment and expenses. Rep. Jacob Anderegg, R-Lehi, said the deal would hinge upon that control.

"If we can't cap the amount of money we're going to put into the program or cap the number of people who can access the program, there is no way to define it," Anderegg said after the panel discussion. "Until we define exactly what those are, it's going to be very hard to grant an open-ended check to pay for it."

Dunnigan said he believes there may be some options for those caps.

"Certainly there are ways to cap costs and enrollment, but I'm hopeful that the federal government will work with us and give us a viable path," he said.

Anderegg said ongoing discussion is beneficial and needed, but he still has not seen any solid suggestions for the plan or how to pay for it.

"I don't know how we get there short from raising taxes (like) crazy or taking it from other aspects of the budget," Anderegg said. "It doesn't hurt to continue the dialogue, but at this point, I think it's dubious that we have a pathway forward."

Gov. Gary Herbert said Thursday during the taping of his monthly news conference on KUED Ch. 7 that it's still uncertain what the group's final product will look like, but he believes it can be done.

"I don't want to predict the outcome yet," Herbert said. "I think we are on track. Everybody seems to be coming to the table with an open mind and a willingness to understand better each other’s position."

I don't want to predict the outcome yet. I think we are on track. Everybody seems to be coming to the table with an open mind and a willingness to understand better each other&rsquo;s position.

Like Anderegg, the governor said an agreement will likely "boil down" to capping expenses, but he's optimistic the concern can be addressed. The expected U.S. Supreme Court ruling on the federal government’s involvement in health care exchanges could have an impact, he said.

If the ability to access subsidized health care through federal exchanges is taken away, Herbert said, that would “warrant even more to have a program like Healthy Utah” that is state-controlled.

Dunnigan said because federal and state officials are still working together and taking time to get it right, it's a hopeful sign for Utah health care.

"Utahns are patient," Dunnigan said. "They'll wait for us patiently to get the right policy."

But the voices of patient advocates and struggling Utahns have repeatedly resounded frustration with the drawn-out debate and wait for coverage.

"At the end of the day, we're mindful that people are hurting, suffering, but it has to be sustainable," Anderegg said. "We have to figure it out."

RyLee Curtis, Medicaid policy analyst for the Utah Health Policy Project, said while the process has been tedious, the conversation is still ongoing, and Utahns shouldn't lose hope.

"If you would have asked me two years ago when I started this work that we would still be talking about this today and working on a solution, I would have not thought we'd be here," Curtis said. "So I think that says a lot about Utah. We could have been a 'hell no' state like Texas, and yet here we here."

Katie McKellar is a Dixie State University graduate with a bachelor of science in mass communication. Before interning at Deseret News, she reported and edited news content for Dixie Sun News, first as Photo Editor, then as Features Editor. Email: kmckellar@deseretnews.com