Editor's note: The contents of the raw body-cam footage are intense and may be stressful for some viewers.SALT LAKE CITY — Less than three minutes after he was approached by a Salt Lake police officer, James Dudley Barker began to scream.

Barker, 42, refused to give his name or the name of the business he says he has a license for as the officer explains he is responding to calls from neighbors.

"You're suspicious in the neighborhood. People are calling in on you. … I didn't stop you for no reason," the officer says before radioing for assistance.

Barker is seen stepping back from the officer and cries, "You can't get in my face, man!" He then swings the snow shovel he is holding.

The video shows the sky as the officer presumably tumbles from the porch. The footage ends a second later as the blue shovel lands a second blow, breaking the camera.

The moment that followed seconds later, when Barker was shot and killed by the unidentified officer, was not recorded.

The officer was hit by the shovel "several" times, police said, and suffered fractured bones in an arm and foot.

Police released few new details Friday of the deadly shooting that took place just before 4 p.m. Thursday near Second Avenue and I Street, but made the body camera footage public.

Barker had allegedly been going door-to-door offering to shovel walkways for residents for money. There was also a report at the same time of a suspicious man looking into the windows of parked vehicles, according to police.

In the video, Barker is seen telling the officer that despite the warm weather, there is snow along the edges of the sidewalk he can remove. He then says he is looking for future business for when it snows again. 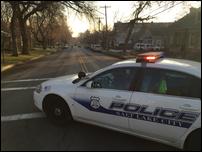 A man who allegedly was offering to shovel walks for money before hitting a Salt Lake City police officer with the shovel was shot and killed by the officer Thursday in Salt Lake City's Avenues area, according to police.

On Friday, a woman at the Avenues house where Barker was reportedly living declined comment. Other neighbors, however, said they were shocked by what happened.

"I don't know everything, but I do know James," said Ron Lee, a neighbor who lives a few doors away.

Lee said he and Barker had lunch at the Avenues Bistro on Third Avenue earlier in the week.

"He looked as good as I've ever seen him," he said.

Lee said Barker lived in his home on Third Avenue and I Street for 10 years and was outside regularly. He described him as a "kind" and "normal guy" who had shown "absolutely no aggressiveness" during the years he had known him.

Lee recalled a time when two trees were cut down in Barker's yard, and Barker was hesitant for the stump to be removed because he wanted to create something from it.

"Instead of just … cutting it down, (he said), 'Can't we make something beautiful?'" Lee said, describing his friend's attitude.

Lee said he was surprised someone called the police on Barker because he had not known him to ever be suspicious.

"I just can't understand how a man would be shot," he said. "As soon as you figure it out, send me a letter."

Officers have a job to do, and frankly the amount of victim blaming on the officer is ridiculous and doesn't leave much air in the room for a rational discussion. That officer did nothing to provoke such an aggravated assault.

In that incident, police say Barker walked into an area of a chocolate store on Main Street where customers weren't allowed and "was acting strangely" and "severely disrupting operations," according to a jail report. Barker also had a warrant out of Salt Lake City at that time for theft of services, according to the jail report.

Ian Adams, spokesman for the Utah Fraternal Order of Police and a West Jordan police officer, said the video is a clear example of an officer "doing his job."

"Officers have a job to do, and frankly the amount of victim blaming on the officer is ridiculous and doesn't leave much air in the room for a rational discussion," Adams said. "That officer did nothing to provoke such an aggravated assault."

Chris Manor, however, disagrees. He and his group Utahns Against Police Brutality are planning a protest Saturday afternoon outside the Salt Lake City Public Safety Building. Manon said he believes the officer pushed Barker, and either man could have walked away before the conflict escalated.

"That begs the question, if the man has not committed the crime, is not being lawfully detained and arrested by the officer, should the officer have the right to put his hands on James Barker at that point?" Manor said. "If you do attack a policeman with a snow shovel after he's pushed, you're kind of playing your cards at that point, and it's probably not going to end well for you."