Have You Seen This? Aerial fish stocking 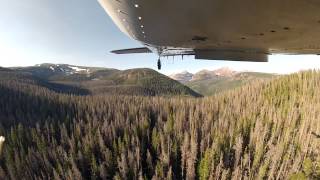 The video shows a plane flying over a high-mountain lake in northern Utah, and when a compartment at the bottom of the plane opens, hundreds of 3- inch fingerling trout are released into the air to free fall into the lake below.

DWR officials have used planes to restock ponds in Utah since 1956, according to a report written by Kamas State Fish Hatchery supervisor, Ted Hallows. Planes are used to stock the lakes that are not accessible by truck, but that still make good fisheries for anglers camping in the high mountain regions.

Aerial stocking happens several times throughout the year and typically begins in July with brook, rainbow, splake and tiger trout, the report says. The aerial-stocking season usually ends in September by stocking the lakes with several different strains of cutthroat trout.

Two DWR pilots fly the planes to airports throughout the state to collect the fish from various hatcheries. Each plane can stock seven lakes on one trip and a total of 40 to 60 lakes in one day, according to the DWR. The planes have seven compartments that fill with water to hold the fish and the compartments open when the plane is 150 feet above the water.

While some of the fish die during their fall, the report says the airplane ride stresses the fish less than a ground vehicle and more of them survive the trip to the lake.