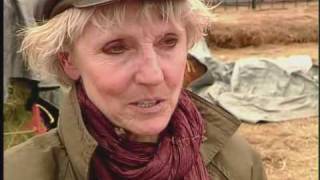 MANTI — When Kaziah Hancock painted her first fallen soldier, she didn't realize she had embarked on a project that would consume the major part of her life.

Now 11 years later, she shipped off her 1,267th portrait to a family whose son or daughter died while serving their country. With the help of additional artists in previous years, Hancock's Project Compassion has been able to touch the lives of thousands more.

“I feel like I have met a lot of really quality human beings through having painted them, and then in the soldiers' families there are a lot of really beautiful people,” she said. “It has enriched my life without a doubt.”

Through Project Compassion, the families of fallen American military service or law enforcement officers can receive a free oil painting of their loved one. The paintings have found their way into homes all around the country, but the story started in Utah.

Hancock, also known as Kaziah the Goat Woman, has been a portrait specialist for more than 20 years. She was looking for a better radio station to listen to while painting one day in 2003 when she came across the story of detective James W. Cawley, the first soldier from Utah to be killed in Iraq. The radio story captured 100 percent of her attention.

“All of the sudden my world changed. The war wasn’t over there anymore, it was right there in my art studio and I wept for the family,” she said.

Hancocks' own life has been touched by war. Her father was shot in the head while serving in World War I and survived for years, but died before she was born so she never had the chance to meet him. Her mother raised her family on his Army pension check.

As a simple act of kindness from one American to another, Hancock said she decided to paint an oil portrait of him and give it to the family as a free gift. When she got in touch with the family, the people who helped them connect asked if she wanted to reach out to the family of another serviceman from Utah who was killed.

She said yes, and soon she was asked whether she only intended to paint soldiers from Utah, or from other part of the country as well.

“I paused for like a whole three seconds that would change the rest of my life and I said, ‘You think I care about the one from Texas or New York any less? No,’ ” Hancock said. "They said, 'You can’t possibly do all of them, there have been almost 80 killed.' And I said, 'I will do as many as a I can until I either get them all painted or I expire trying.’ ”

It has been a rewarding experience, Hancock said. She said one time she opened a request from a mother and when she looked at the image of the serviceman, it was almost like a dream because he looked like the son Hancock imagined she would have had if she had been able to have children. He was a medic in the Army who died while covering someone else's shift.

I feel like I have met a lot of really quality human beings through having painted them.

The project has lasted longer than she imagined, but Hancock said she intends to keep going.

“It’s a beautiful thing,” she said. “I get a lot of love and appreciation from the parents for honoring their precious kids.”

She said she tries to make the application process as easy as possible and will often fill out a request with family members over the phone if there is a quality picture of the person who died available online.

From 2005 to 2012, Hancock received funding from a donor to reimburse other artists to help work on Project Compassion, but in recent years she has been working alone and paying for art supplies out of pocket. When she can sell her other paintings of landscapes or portraits, which have sold for between $2,000 and $10,000 in the past, she said she typically only takes out $65 for herself to cover the cost.

“It’s a matter of being in the life of the service,” she said. “That is what I’m going to do for the rest of my days. Where all that leads me I really don’t give a rat’s rear.”