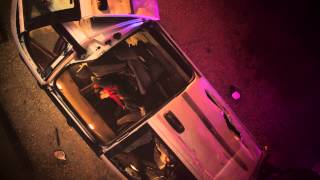 SALT LAKE CITY — Super Bowl commercials can often be just as memorable as the actual game. An ad from the Utah Department of Transportation that ran during Sunday's game has some people saying it went too far.

Each year there seems to be an ad that sparks debate, but it’s typically not a local commercial. UDOT's commercial aired during the local time slots available during the Super Bowl. The commercial showed what appeared to be a young boy named Sam sleeping in a car seat.

“Sam looks like he’s sleeping,” the commercial’s narrator says. “But he’s not. He’s not thinking. He’s not breathing. He’s dead.”

The commercial explains that although the boy was wearing a seat belt, his parent wasn’t. And when the car rolled, the parent flew into the back seat and crushed the child.

Despite the intended message urging people to use their seat belts every time they get into a car, a number of people have criticized the commercial, saying it is not appropriate for children to see.

“Maybe they would like to come over next time and explain why there is a dead child on TV to my crying 4-year-old,” said Ariesa Wortelboer.

Maybe they would like to come over next time and explain why there is a dead child on TV to my crying 4-year-old.

“I think it was a little insensitive and not an appropriate situation,” Chantelle London said. “Many little kids watch the game with their family.”

However, UDOT spokesman John Gleason said they were fully aware that families would be watching.

“I think it’s important to state this was an actor. This was not a real crash scene,” Gleason said. “We really wanted to spark some conversation between families and maybe inspire someone who hasn’t worn their seat belt to start doing so.”

“There needs to be more (commercials) like it,” Michael Mathews said. “Obviously, people don’t pay attention to simple text on a billboard when it comes to safe driving.”

“If it saves even one life it was worth it,” Liz Reidhead said.

Gleason said the commercial is difficult for everyone to watch, but if it can save lives, it’s done its job.

“As hard hitting as it is, as difficult as it is to see a child in that state, if it can save lives we feel it’s a message that needs to be shared,” he said.

Sgt. Todd Royce of the Utah Highway Patrol said the statistics about people not buckling up is “alarming.”

“A statistic that’s still alarming is that about 50 percent of the fatalities out there, the person is not buckled up,” he said. “This is actually a very toned-down version from what many officers see out in the field.”

Last year, 71 people died as a result of not wearing a seat belt. UDOT hopes the commercial will help reduce that number this year, even if only by one.