Physics is fun with 16-year-old's app 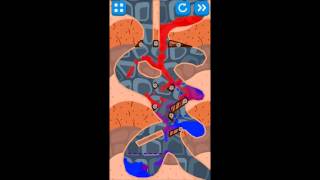 Mix It Up! Gameplay: An amazing liquid based physics puzzler

Joshua Wilde, a student at Westlake High School, created the iPhone game “Mix it Up!”, combining slicing physics with fluid physics and mixing. “Mix it Up!” is the second game Joshua has developed.

He had seen other games using liquid physics, so he decided to try his hand with "Gateway".

The games are an expression of his interest in physics and a way for him to earn some money, he said. “Mix it Up!” is available on iTunes, though “Gateway” is not currently available for download.

“I wanted to see if I could do it,” Joshua said. “I guess I’ve always been sort of interested in physics. I’ve always liked math.”

To develop the realistic liquid physics properties, he said he read at least 20 dissertations about recreating those characteristics on a computer. He coded the game in Objective-C on a Mac computer starting in February and released the game last week.

“It took awhile to finally figure out how I wanted to use the liquid physics I created but I was finally able to come up with an original, interactive and fun game,” Joshua wrote on his blog.

The game is available for download on iTunes for 99 cents.