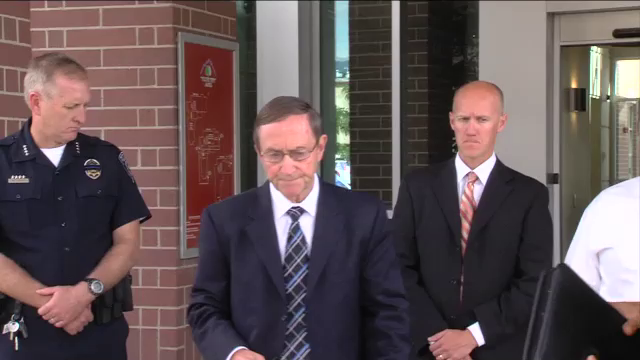 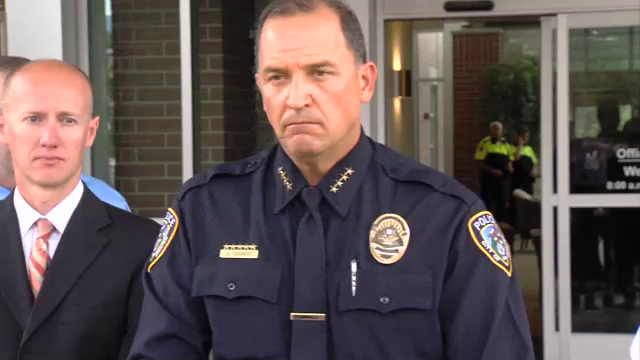 DRAPER — What started as "unintelligible radio communication" from an officer turned into a citywide crime scene Sunday with the officer dead, a woman shot and injured, and the man suspected of orchestrating the shootings in critical condition after turning a gun on himself.

Draper Police Sgt. Derek Johnson, 32, was pulled from his mangled police vehicle on Fort street shortly after 6 a.m. with gunshot wounds that proved fatal. He was pronounced dead shortly after being flown to Intermountain Medical Center, leaving a wife, child, other family members and a grief-stricken law enforcement community in search of comfort and answers.

“We are here under the most tragic of circumstances,” Draper Police Chief Bryan Roberts announced as he confirmed the death of Johnson Sunday morning. He later described the events that would shut down much of Draper for the day and leave the city suffering its first loss of an officer.

Johnson came across a silver Volvo that was parked in an unusual position on 13200 South Fort Street shortly before 6 a.m. A man, 35, and a woman, 34, were with the car when Johnson stopped to investigate, Roberts said. 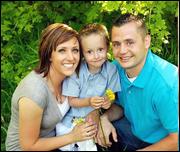 Sgt. Derek Johnson was a highly respected member of the law enforcement community, friends said. He leaves behind a wife and young son.

“As Sgt. Johnson approached the couple in his vehicle, the man ambushed him and began firing at Sgt. Johnson,” Roberts said.

Johnson was hit by a bullet and drove down the street as the suspect continued to fire at him. Johnson’s car ran off the road and hit a tree about three blocks north on Fort Street.

Johnson never left his vehicle nor did he return fire.

Before the shooting, the man and woman were in a hit and run accident, striking objects along 900 East and 13800 South, police later learned. Investigators believe the man shot the woman at some point and after shooting Johnson, the man shot himself. One gun was found at the scene.

Police believe the woman involved was a victim of this crime.

Police would not release the identity of the man or the woman. Both remained in critical condition at a local hospital Sunday night.

"It was five continual shots. Bam, bam, bam, bam, bam, bam," said Brian Pollick, who said he was awakened by the sound just before 6 a.m. He said he saw police lights about four minutes later, at Fort Street and 13200 South.

She said a police car had crashed in the field across the street from her house. She then witnessed an officer being pulled out of his car. Emergency personnel began CPR and the officer, later identified as Johnson, was taken by an ambulance to a medical helicopter down the road, she said.

One of her neighbors told her that he awoke to a SWAT team surrounding his barn as the quiet of an early Sunday summer morning erupted into police activity.

Police poured into the area, with units from Utah Highway Patrol, South Jordan, Sandy, Midvale, Utah Transit Authority and the Orem team assisting in the investigation and an initial search for suspects connected to the shooting. A canine team from Orem and a Department of Public Safety helicopter joined in the search while the area remained locked down.

"It was just mass confusion after that. Just officers every place. I've never seen so many officers on scene," Szelag said.

The Draper neighborhood of high-end homes was contained within a police perimeter that stretched for 14 blocks from north to south and 10 blocks from east to west. A crime scene that spanned up to six blocks remained under investigation Sunday evening.

Residents were asked to stay in their homes as police searched for anyone who may have been responsible for the death of Johnson. But police later suspended the manhunt, said the neighborhood was safe, and pointed to the man and woman involved in the shooting as the lone suspects.

We are here under the most tragic of circumstances.

Drivers in the area were stopped by officers wielding assault rifles who looked inside the vehicles and asked they had seen anything suspicious. Drivers were asked to take alternate routes.

"We knew something was real wrong when we saw officers going back to their trunk to start pulling out the assault rifles," David Szelag said.

As a nurse, Kris Szelag said she felt helpless.

"I just wanted to help any way I could but we're also taught not to get in the way," she said.

Church meetings throughout Draper were canceled and police asked residents who lived on Fort Street to stay in their homes while the investigation continued.

The neighborhood perimeter was entirely cleared late Sunday afternoon, with the exception of Fort Street between Walden Lane and 13300 South, where detectives were still gathering evidence.

Draper City Council member William Rappleye, who lives on Willow Springs Lane, said his home was on the outer rim of the police perimeter. He offered support at the press conference and condolences to family and police:

Those who knew Johnson said he loved his family and his work as a police officer.

"He was a very dedicated, devoted and highly decorated police officer," Roberts said.

Johnson grew up in Utah and was part of Alta High School's 1999 graduating class. While in high school he was an Explorer Scout for the Sandy City Police Department, knowing early it was the career path he would take.

He married his high school sweetheart in 2000 and they have a seven-year-old son.

Johnson worked as a police dispatcher and ultimately went through police academy training. He has worked for the Draper City Police Department for the past eight years, first as a reserve officer and eight months later hired on as a full-time officer.

Johnson was one of nine presented with the Distinguished Service Medal in February by the Draper Police Department for his role in the investigation and prosecution of a child abuse homicide in 2012.

"I have known Derek for many years. He is one of the best and most qualified sergeants on our force," Draper Mayor Darrell Smith said from a prepared statement.

Smith and his wife met Johnson's family at the hospital and at their home Sunday morning.

"They are wonderful people and have suffered a tremendous and tragic loss," he said.

It has been 13 months since an officer died in the line of duty in Utah.

Utah Highway Patrol Trooper Aaron Beesley was the last officer in Utah to die in the line of duty. Beesley was assisting in a search and rescue on the Mount Olympus Trail when he fell from a cliff.

Timeline of events for September 1

Many in the community and the state rallied together Sunday to support the Johnson family as well as Draper Police, a department that had not lost an officer in the line of duty.

Ryan Walsh with The Utah 1033 Foundation was at Draper City Hall Sunday, waiting to meet with Roberts before presenting a $25,000 check to the Johnson family to help with immediate expenses associated with their loss.

The foundation which began in 2011, provides immediate funds to the families of fallen officers in Utah.

Just after 3 p.m., Nevah Stevenson, a Draper resident, placed a vase of 21 yellow roses outside Draper City Hall, with a sign that read: "Holding you in our hearts Johnson family. May God bless officer Derek Johnson."

While on Facebook, Stevenson noticed that people were tying yellow ribbons around Johnson's neighborhood, so she decided to contribute as well.

"I'm just a concerned and heavy-hearted citizen today," she said.