Editor's note: This is the final entry in the three-part series on World War II ace pilot Grant Turley and the search for his crash site. Read part One here and Part Two here.SALT LAKE CITY — My great-uncle Grant Turley was a fighter pilot during World War II. I’m named after him and he has always been my hero. At the age of 21, Grant went on a 10-day tear over the skies of Europe and became Arizona’s first ace.

Grant took part in the first daylight raid on Berlin on March 6, 1944. His plane was shot down and crashed into a lake in the town of Aumuehle, Germany.

After nearly 70 years of ambiguity, members of my family joined together with a team of German aviation experts to search for wreckage from Grant’s plane and confirm the location of his crash site.

I’ve dreamed of finding Grant’s plane since I was a boy and first heard the stories of his bravery. I became fascinated with World War II aviation and the pilot I was named after. The first plane model I ever built was a P-47 Thunderbolt; and at the age of 8, I won a statewide art contest with a drawing of “Kitty” in flight. Grant’s plane became a symbol of the man I never knew — a connection to the past. 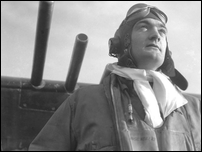 A Utah family joins forces with a team of German aviation experts to locate the crash site of WWII ace Grant Turley. This is the story of their search to find the truth about Turley's death.

My wife, Jennifer, and I first learned about Werner Oeltjebruns’ discoveries and the location of the crash site from my grandmother (Grant’s sister Monita). It was October 2012, and we were visiting family in Park City. My grandmother had printouts of Oeltjebruns' research and we read through them in amazement. Jennifer and I love exploring new places, and I’ve been a certified scuba diver for more than a decade, so by the time we’d finished the last pages, we both knew that a search of the lake was on the horizon.

We contacted Oeltjebruns, who eagerly offered the full support of his team for the search. My younger brother Jon lives in Frankfurt with his family and also volunteered to assist in the project.

I then began the process of assembling my search equipment. I chose to use Minelab’s Excalibur II metal detector because its coil has an extra boost that could pick up faint signals from the lake’s deep mud. It also features broadband spectrum technology for more accurate readings, which was important to me because this would be my first underwater search.

Meanwhile, Oeltjebruns and his research partners from Flieger, Flugzeuge, Schicksale conducted interviews and rounded up every scrap of information that could aid our search. They met with the owner of the lake to seek permission for us to access it. The man was familiar with the story of Grant’s crash and expressed excitement about our project. He granted us unlimited access to the lake and even provided a rowboat to go to and from the island.

On our first day in northern Germany, we met with Oeltjebruns and three other aviation experts — Hermann Wilke, Volker Urbansky and Christian Klaiss. After a warm greeting, we made the drive to the crash site.

A large archway greeted us as we exited the highway and drove down the tree-lined lane leading to the lake. After a short distance, we veered right and followed a dirt road through a grove of towering trees. The lake slowly came into view. Surrounded by lush, moss-covered trees, it was roughly the size of three football fields end-to-end. A handful of old farmhouses were visible through the trees at the far end.

Oeltjebruns and Wilke led the way down a path to the water’s edge. Directly in front of us was the island where Grant’s plane had crashed. It was smaller than I’d imagined. A family of ducks swam past us, seemingly unaware of our presence. I paused and listened to the aspens sway in the breeze. It occurred to me that although this had been enemy territory, there couldn’t have been a more beautiful, calm place for my hero to spend his final moments.

As we discussed our plans for starting the underwater search the next morning, I was touched by how much Oeltjebruns and his friends cared. It had been 69 years since my great-uncle’s plane was lost, and although none of these men had a direct connection to him, they‘d dedicated hundreds of hours to helping my family find answers. To help us find peace.

I turned to Oeltjebruns and again thanked him for all he’d done. “It is our pleasure,” he said. “Perhaps tomorrow we will find a piece from Grant’s plane that you can take home to your family!”

In the morning, temperatures dipped into the low 40s and a steady drizzle dimpled the surface of the lake. Hauling my scuba equipment from the car, each exhale was clearly visible in the cold air. I sat on the bank and dipped my feet in the water, thankful for my 5-millimeter wetsuit. I’d considered using something lightweight for increased mobility during the search, but luckily I found a hefty wetsuit made by SUBGEAR that also offered flex panels to allow free movement in the water.

I plunged into the lake and the shock from the brisk water felt like a prolonged slap to the face. As I descended to the bottom, a cloud of silt swirled around me. I switched on my Excalibur II metal detector and the dull, tedious hum filled my ears.

Back on shore, Jennifer documented the expedition with photographs, while Jon ferried metal detectors and other equipment to the island and helped Urbansky and Klaiss start the land search. They focused their efforts on the shoreline where the P-47 crashed.

I’d been underwater for about 30 minutes when my metal detector picked up a signal from deep in the mud. I honed in on the source and anxiously dug down into the darkness. My fingertips scraped metal and I slowly cleared the mud from around a 2-by-3-foot piece of corroded metal and lugged it to the surface.

Bursting from the water, I excitedly lifted the object over my head and called out to Urbansky. He took a quick look at it and said it was part of a wheelbarrow.

“Are you sure?” I asked. But as I stared at the object, it became clear that he was right. Over the next hour I found more metal garbage, which I loaded into the boat so that Jon could take it to shore and dispose of it. The property owner had been so gracious, cleaning his lake was the least I could do.

With only garbage to show for thus far, I gradually narrowed my search until I was in the shallow water of the crash site. Submerged tree branches repeatedly snagged my diving equipment and the thorns left some nasty scratches.

Just as I was beginning to wish I were done and back at the hotel, a commotion above the surface caught my attention and I raised my head from the water.

“Volker found something!” Jennifer shouted from the shoreline. “He found a pipe from the plane!”

A Utah family joins forces with a team of German aviation experts to locate the crash site of WWII ace Grant Turley. This is the story of their search to find the truth about Turley's death.

Shifting my gaze to the island, I saw Urbansky triumphantly holding a thin copper pipe about four feet long. Moments later, he located a handful of aluminum aircraft bolts. We rendezvoused on the shore and Oeltjebruns inspected the pipe and bolts and determined they were from a World War II aircraft. He later consulted a detailed parts list and stated conclusively that they matched parts from a P-47.

We all took turns examining the items and it felt surreal to be holding the relics in my hands. I thought of Kitty and other family members who had lived through the tragic years following Grant’s death. Memories flooded back to me from my childhood — the hours I’d spent speculating on the whereabouts of my hero’s plane. Throughout this expedition, I’d had my doubts as to whether we’d be successful. And now a 69-year-old mystery had been solved, and we had a tangible piece of history to bring home to my family.

The following day, we finished our search by comprehensively scanning the area around the crash site one last time. Urbansky and Klaiss returned to the island to ensure they hadn’t missed additional remnants. Oeltjebruns and Jon used a military-grade metal detector in the boat to scan the bottom of the lake. Each time they registered a signal, I dived to the bottom to investigate. No further pieces from Grant’s plane were found.

Our search conclusively verified the eyewitness accounts and wartime documents. Grant’s entire plane had been hauled out of the lake by the German military in April 1944. All that remained were the small pieces we found and the legacy he’d left with my family, Oeltjebruns and countless others.

It was a strange experience leaving the lake. The place edified me in ways that I could never have anticipated. As Jennifer and I drove to the airport, I felt a sense of loss. I wasn’t missing Grant — I’d never felt closer to him. I missed our new friends and the camaraderie we shared while searching the lake.

“It was good that a part of your family was here at the crash place of Grant M. Turley,” Oeltjebruns wrote to Wanda. “And I felt that your brother was with us at the search all the time.”

My wife and I brought the relics from the plane home and gave Grant’s siblings a full report of our experiences. Notably absent from our family visits was Kitty, who passed away in 2004. I carefully cut the 4-foot pipe from Grant’s plane into pieces so that each of his siblings could have one to remember him by. They insisted that I keep a small piece as well, which is now a treasured possession.

Jennifer and I hope to one day return to the special place where we connected with Grant’s legacy. Several members of my family plan to visit the lake in the future, and we are currently planning a memorial plaque that will be placed near the crash site.

Wanda accurately summed up our family’s emotions when she wrote these words to Oeltjebruns: “ ‘Missing’ leaves so many unanswered questions and a loss that never heals. I cannot tell you of the peace it has brought to my heart to know just where his final moments on this earth were spent.”

Grant Olsen joined the ksl.com team in 2012. He covers travel, outdoor adventures, and other interesting things. Contact him at grant@thegatsbys.com.