MAPLETON — A California teacher who talked a student with a gun into surrendering does not want to be labeled a hero, according to family in Utah.

Ryan Heber, 40, has largely refrained from making public statements about the shooting that took place Thursday at Taft High School, a school of about 900 in rural Southern California. A 16-year-old student armed with a shotgun walked into Heber's classroom, shot one student and shot at others, missing them, before Heber and another staff member talked the suspect into lowering his gun.

Many have hailed Heber as a hero in the days since the shooting, but Heber's sister-in-law, Amy Hawkes, said he is not comfortable with the label.

"He is still trying to wrap his head around everything that has happened," Hawkes said. "He's having a hard time with being labeled a hero."

In one of the only interviews Heber has granted since the shooting the teacher told KABC-TV he is not ready to talk about what happened in his classroom.

"I'm just a teacher, a husband and a father to my two boys," he said. 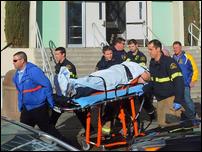 A 16-year-old student armed with a shotgun walked into a rural California high school on Thursday, shot one student and fired at others and missed before a teacher and another staff member talked him into surrendering, officials said.

Kern County Sheriff Donny Youngblood said at a news conference Thursday evening that when shots were fired, Heber tried to get more than two dozen students out the back door of the classroom and talked to the shooter to try to distract him. Campus supervisor Kim Lee Fields, who responded to the call of shots fired, also talked to the teen.

"They talked him into putting that shotgun down. He in fact told the teacher, `I don't want to shoot you,' and named the person that he wanted to shoot," Youngblood said at the time.

That was unsurprising to David Heber, the teacher's father. The man told the Bakersfield Californian "his students like him a whole bunch."

"He's not the kind of teacher a student would try to hurt," he said. "He's definitely someone who could talk a kid down in an emergency."

Meghan King, 20, a former student of Heber's who was an aide in his classes, agreed.

"He always knew how to make you feel better," she said.

He always knew how to make you feel better.

Police are investigating claims that the student was targeting people he felt had bullied him in the past. "Certainly the two people that he targeted had bullied him, in his mind," Youngblood said.

The student was arrested on suspicion of attempted murder. It is not clear at this time whether he will be tried as an adult. The student who was shot suffered critical injuries and is being treated at a local hospital, but there were no other major injuries. Heber's forehead was grazed by a bullet, while one student hurt her ankle while trying to flee and another may have suffered hearing damage due to her proximity to the gun when it went off.

The shooting at Taft came less than a month after a gunman entered Sandy Hook Elementary School in Newtown, Conn., killing 20 children and six staff members before turning the gun on himself.

The shootings have prompted a national conversation on gun control and promises from Pres. Barack Obama and Vice Pres. Joe Biden to find new ways to curb gun violence.

The vice president said he will deliver recommendations to Pres. Obama by Tuesday on steps the nation should take.