SALT LAKE CITY — Shoveling the sidewalk. Blazing a trail with a snowblower. Even walking the dog on a snow day. They're activities that are a regular part of winter life in Utah, but doctors say they're also regular causes of weather-related injuries.

"We see a lot of back injuries from shoveling snow," Alta View Hospital emergency room doctor Bruce Argyle said Wednesday. "You get the summer off, get it deconditioned, then you start shoveling heavy snow and your back hurts and we see a lot of people coming in with slipped discs, back strains due to shoveling snow."

In fact, emergency rooms frequently see spikes in weather-related injuries after winter storms, though doctors say it's difficult to predict which storms will become larger producers of problems. The doctors are not just talking about injuries from car crashes and exposure injuries from the cold. They also see broken wrists, hip fractures, even head injuries from falls.

"People are careful when there's a lot of snow, but then a couple days later — as the snow turns to ice — that's when people start to slip and fall down," Argyle said.

Some injuries are more exotic, from falling off roofs while clearing snow or while trying to clear snow blower blades.

People are careful when there's a lot of snow, but then a couple days later &mdash; as the snow turns to ice &mdash; that's when people start to slip and fall down.

"Going from a snow shovel to a snow blower trades one type of injury for another," Argyle said. "If you can keep your fingers out of the snow blower you're going to do fine, but we do see a lot of people trying to clean up a jammed snow blower and they take off a tip of a finger."

If that sounds extreme, it probably doesn't to Avenues resident Sarah Munro.

"My husband got a little too close to the blade and lost part of his finger," she said.

Munro was spotted Wednesday with a shovel, instead of a snow blower.

"Nobody's gotten hurt so far, which we hope will continue to be the case," Munro said.

Conversely, a man on another Avenues street was using a sharp-bladed snow blower.

"I try to be real careful," Doug Moore said. "I know it can happen."

He was also trying not to fall, something the snow and ice make more likely. Argyle warned of the dangers for people with balance problems. 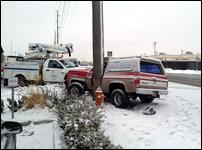 Wednesday is expected to be a very busy day both on the roads and in the skies as Utahns make their way home from Christmas destinations. With a winter storm already impacting parts of the state, traveling could be a little dangerous.

"It makes good sense that if you don't have good balance then you're going to be in trouble," he said. "I find that as I've gotten older, I'm a little more careful walking out to pick up the paper on the driveway than I used to be."

Adele Kimbrough was trying to navigate a somewhat steep grade with her dog.

"I was actually worried about going down this hill because if my dog pulls me, it makes it easy to slip," Kimbrough said. "I slipped once already and kind of pulled myself."

Doctors are trying to preach common sense to those who will listen.

For those who shovel, Argyle is reminding to bend with the knees and throw with the arms rather than doing both with the back.

Argyle urged anybody walking in the snow to wear shoes with good soles that provide traction.